thelostotter said:
I didn't have to do anything to get the clearance where it should be. I used ARP main studs and they include a sketch to shorten and counterbore the oil tube spacer so it sits on the stud correctly. I did that and the clearance worked out to be 0.270". Moroso recommends 3/16" to 1/2". No oil pressure issues so I guess it is fine.
Click to expand...

Ahhh should have thought about that. I am on the stock main hardware still.

I finished test fitting the Evo L seat on the Sparco sliders and base. Took a few iterations to get it right but it fits perfect. Need to figure out how to best mount the sub belt and adjust the harness a bit since it was setup for the stock seat. The Watson 4 point bolt-in roll bar and SVE rear seat delete were done this spring.

I installed the Trackspec hood vents that replace the 2017 stock vents. Install went ok. I trimmed as much as I could with tin snips but had to use an angle grinder with a thin cutting wheel on it for the remainder. Word of advice, if using an angle grinder to cut the hood try and go fast to avoid getting too much heat into it. I blistered the paint in two areas that are somewhat visible with the vents installed. Once I get the car cleaned up I am going to try and fill the affected areas with touch up paint on a toothpick to prevent water from getting in there and causing more issues later.

Great build! makes me excited to finish mine.

What seat base did u use? 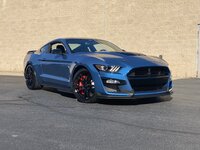 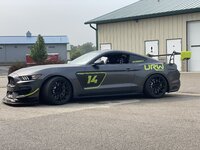 Tonymustang302 said:
What seat base did u use?
Click to expand...

Im using a planted one.

Have not driven the car much lately. Been working with PBD on tune revisions because the initial datalogs showed the throttle body closing around 4500 rpm when WOT. The fix for that ended up making the drivability suffer, so hopefully we can get it squared away soon. Car feels fast, but should be better once this is ironed out.

After installing the hood vents I noticed my IAT increased quite a bit and I didn't like how if I ever got caught in the rain water would pour right into the GT350 airbox. So I cut a piece of lexan to fit. Should solve both issues.

Got tired of going around and around with PBD on tune revisions and the car never felt like it pulled up top like I expected it to. I also saw 31 degrees of timing on 91 octane which I didn't like. Going to try and get my money back for that tune. Went back to AED and he had it figured out with one revision. Pulls like mad all the way up to 8k rpm which was as high as I was comfortable with and that's probably higher than it should regularly spin with stock (Boss 302R) valve springs.

I got tired of it being real difficult to get the oil up to temp and now that the weather is cooling down it's going to get even worse. I made a cover with 1/8" silicone sheet that I can easily hang on top of the cooler that blocks about 80% of the frontal area. Can remove it in a few minutes for track days.

Maiden voyage yesterday... ran great and my laptimes were ~2 seconds faster than my last time to this track in May when it lost compression. Temps were in the mid 60s I believe but I was pretty relieved to see my oil temps peak at 220F and my coolant temp sensor I added in the block peaked at 200. Forgot to check CHT. Now I just need to see what it does when the weather is 40 degrees warmer.

So I've got 5 events on the car since the rebuild now and everything seems to be working OK. I've been waiting for a hot event to really test my oil cooler setup and yesterday was about 99F during my last session. Coolant temp peaked at 228F and oil at 248F near the end of a 20 minute run. Hot oil pressure was 80 psi shifting at 7300 rpm. Seems safe to me but wanted others opinions?

I'm far from a great driver but overall I am super happy with how the car is running and handling. The only thing that needs improvement is me.
Last edited: May 3, 2021

First update in a while. I destroyed a set of NT01s in 4 HPDE days which was about half of what I was hoping to get. I wondered if maybe the rubber bushings in the front tension links or the balljoints were bad allowing the the wheels to toe out excessively. Car felt very darty even after an alignment so I decided to go through and redo my setup. Last alignment could have been off too but it was the same shop that I've been using for years.

Removed the Steeda dual rate springs and put in BMR handling springs. Replaced both control arms and tension links in the front, I bought the Steeda kit with the corrected roll center and the spherical bearing in the tension link. I had the roll center correction before but the ball joint felt a little loose so I decided to replace it. Adjusted the sway bar since I was changing springs. Was 2nd hole from full stiff (out of 4), now it is on the 3rd. 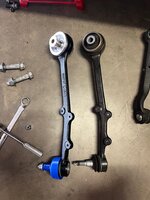 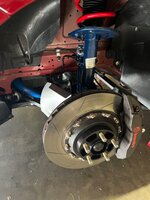 Since I did bearings up front, I dropped the subframe and installed the BMR aluminum subframe bushings, BMR differential bushing supports, and BMR LCA bearings. What a huge PITA removing the bushings. The RLCA bearing install was pretty tedious even with frozen bearings and a 20 ton press. I thought something was going to break, but no issues. Also added Steeda eccentric bolts to make rear camber adjustment easier. Not surprisingly, I can hear the diff whine now, which isn't necessarily bad and I was expecting it. Also, the driveline clunking is amplified 10x over stock. No big deal, expected that too. What surprised me is that the suspension action is possibly quieter than before, I was expecting more NVH. Getting rid of the bushings and replacing with aluminum pucks and bearings tightened up the car big time, very noticeable.

Installing the subframe solo blows. After struggling a few times I went to the store and bought some long bolts and cut the heads off. Used those as alignment dowels to raise the subframe into place and removed them and replaced with the proper bolts. 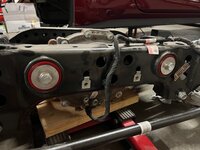 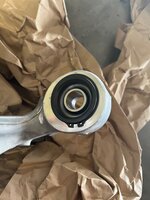 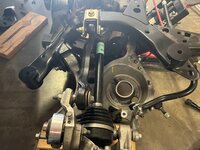 Front
Camber -3.05 degree (passenger side strut tower is maxed out)
Toe in 0.1 degree ( I usually shoot for 0, decided to try slight toe in since I was scared of cording the inners again)

My previous best lap at AMP CCW with the NT01s was a 1:50.283 in October with nearly the same weather as today. Today I was able to squeak out a 1:48.385 which I was pretty impressed with. The car was so composed, balanced, and more predictable than before. I'm a fan of the GY SC3 tires so far.

2017 Mustang GT Track Build
HPDE/Track
You must log in or register to reply here.