I am wondering how common this particular cooling system failure is.


Here's the Executive Summary: The engine part that Ford refers to as the "Water Outlet" (Ford FR3Z-8592-A) has a pressed-in nipple which is used to connect the coolant return line to the expansion tank. The nipple came out of the Water Outlet and was spraying coolant up towards the hood.

I was fortunate to have this occur at the end of our second track day at Oregon Raceway Park. About 15 of us had rented the track for two days and had it all to ourselves. No Sessions or Groups - just go out and drive as much as you want! I took full advantage of the opportunity. I consumed over half the life of my brand new Falken RT660 tires.

The failure occurred as I was completing my last hot lap as our track was about to go cold for the day when I saw and smelled coolant erupting from the hood. I quick check of the gauges showed the engine temp was normal for the conditions - which is slightly elevated - but found nothing else amiss. Fortunately, I was two turns from the pit entry. I idled quickly into the pits and up to my paddock spot. This is the exact scenario for which I purchased a trailer and installed a winch.

Due to the sun shining directly on the engine bay, the brightly illuminated surface made it difficult to peer deeper into the dark engine bay to see where the leak occurred. It didn't matter right then as the track day was over anyway. I loaded up and towed the car home the next day.

Once I got decent light on the engine, it became clear that the heater hose had become disconnected from the Water Outlet. I purchased a replacement Water Outlet from Ford and could have fixed it myself, but the car is still under warranty, so I decided to let my dealership repair it including the new coolant and pressure testing. I also wondered if they might find anything else that may have contributed to the fail.

The dealership just called and said they found nothing else amiss. I should get the car back later today.

I searched the forums and found one other thread discussing this issue which contained the suggestion to replace the pressed-in stud with a screw-in type. If this fail happens again, I will explore this screw-in option further. 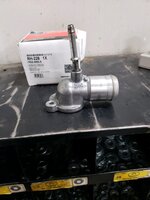 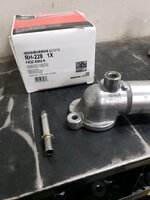 Straight Roads are for Fast Cars. Turns are for Fast Drivers.
"There's never enough horsepower - Just not enough traction" - Carroll Shelby
The fact that there's a Highway to Hell and only a Stairway to Heaven should tell you something about anticipated traffic.

I have seen this happen one other time.

absolutely replace that with a screw in nipple, I'm thinking that since that is a relatively small part, it's ability to absorb heat is diminished and causing it to over expand, loosening the nipple. The reason I say that is because water pumps use press in nipples all the time, but they are substantially larger piece of aluminum.
Glad you caught it and without a major issue.

After seeing this I think I'll braze mine since it's off now anyway.