I figured I should probably dive in where this whole thing started: My love affair with the Boss 302. As I briefly mentioned in another post, I fell in love with the Boss when I heard one start when I was in North Carolina. He had parked across the street and hearing that insane noise bounce off all the cars around me when it started was enough to really cement my love for the Mustangs. I instantly turned my back on my Challenger and knew I needed to find a way to get something I could start tracking.

Fast forward a couple years, I heard a clip of the GT350 at the Nürburgring and knew that had to be the one. I knew it was the car for me because it was the first time I didn’t care what color the car was, just that I had to have it. After a couple years of obsessing and calling what felt like an endless number of dealers, I found a dealer in Alabama that was willing to sell under MSRP. I arranged to have the car shipped without having ever test driven it, without having ever driven a Mustang, and without much manual experience at all (I moonlight as a semi-professional questionable decision maker). What I did have though was an abundance of overconfidence and underqualification, my favorite cocktail.

When the car arrived, it had been sitting in the dealer showroom for quite some time and had an incredibly low battery. The guy who brought the car out of the trailer was awesome and jumped the car in the middle of a four-lane street and sent me on my way. I made it about half a mile to my driveway and proceeded to stall it with half the car hanging out into the cul-de-sac. With no battery charger in sight, I called my buddy which happened to have it and explained to him how stupid I was. Over the course of the next two hours, I decided to pop the hood and throw on the FP catch cans I had ordered because why not choose that time to start modding? I’m nothing if not an opportunist (also an idiot).

After bandaging my ego and getting the car in the garage, I spent the next few months exploring just how much I liked taking perfectly good money and turning it into noise. I regret nothing.
Last edited: Aug 8, 2021 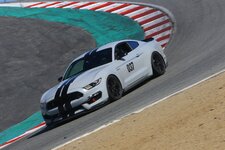 You were at Buttonwillow for Super GT Cup? What class were you in?

You were at Buttonwillow for Super GT Cup? What class were you in?
Click to expand...

I was running in the beginner group since it was my first time at that track. Really wish I would have signed up a couple classes higher though. It was traffic all day. I did see your car there though, what a stunner!

5.2 liters of democracy said:
I was running in the beginner group since it was my first time at that track. Really wish I would have signed up a couple classes higher though. It was traffic all day. I did see your car there though, what a stunner!
Click to expand...

Oh ok, so you were doing HPDE? Gotcha.
Yeah I got stuck behind the same Camaro on two separate sessions. Could have possibly podiumed again if I hadn't, but that's ok; it's all for fun anyhow.

Are you going to be at the next one in December?

Great looking Stallion and since it was your first time at Buttonwillow sounds like a Pale Ale would have tasted good after running the Pale Steed through it's paces.

Ewheels said:
Oh ok, so you were doing HPDE? Gotcha.
Yeah I got stuck behind the same Camaro on two separate sessions. Could have possibly podiumed again if I hadn't, but that's ok; it's all for fun anyhow.

Are you going to be at the next one in December?
Click to expand...

Definitely. I'm also signed up for ACS in October and will probably hit Sonoma early October as well. Something about Buttonwillow really does it for me. I love that track.

Bill Pemberton said:
Great looking Stallion and since it was your first time at Buttonwillow sounds like a Pale Ale would have tasted good after running the Pale Steed through it's paces.

Have to admit, the Boss S sounds fantastic , but the scream of the 5.2 of my 2017 GT350 is oft times missed ---- still one of my favorite revolution songs of any car I have owned!
Click to expand...

The Boss is what started my love of these cars. I was visiting family in NC and heard a Boss start up without the baffles. From that moment on I knew I had to get rid of my Challenger and get in some sort of Mustang. It just so happened that everything lined up at the perfect time. I'd love to add a Boss to the stable in the future!

5.2 liters of democracy said:
Definitely. I'm also signed up for ACS in October and will probably hit Sonoma early October as well. Something about Buttonwillow really does it for me. I love that track.
Click to expand...

Could not agree more! Buttonwillow is my favorite Socal track. Very technical and precise.
I'm doing BW in October with Nasa, something in November, and then Super GT Cup at BW again in December

Have run Buttonwillow and Thunderhill, but have to agree that Sonoma is on my bucket list after talking to so many friends who have run there. Only been a spectator at Laguna , but like many others, that course also makes the list!

Since I prefer California Wines , a track with a corkscrew just has an aura of a warm bouquet with a soft nose of caramel and oak.
Last edited: Aug 5, 2021

I'd like to keep updating this as I go. I've become a fan of reading through the build threads during downtime at work. I started 2021 wanting to try and do a track day every month, but luck wasn't on my side. After a pipe burst in my garage ceiling and I walked into the garage to find many gallons per minute of water spraying out of the ceiling light fixtures, I sadly had to put my plans on hold. Fast forward a few months though and I started to get into the swing of things. I've had several fantastic track days this year, but I'll fast forward to last weekend since there's the most to share.

I was signed up for Laguna Seca for quite some time and decided I was going to give trailering the car a shot. I've never towed anything in my years on this rock, but nothing was going to stop this overconfident and underqualified idiot (a theme!). I spent lots of time leading up to the big day watching @Fabman's videos both because his build is awesome and I'd like to be half the driver he is when I grow up. My fiancé tells me I'll never grow up so that may not happen, but I'm gonna keep breaking things trying. Nevertheless, I managed to squeeze this thing onto a rental U-Haul trailer with about an inch to spare on each side.

Laguna Seca was awesome and was the first track day I felt like I was really starting to carry more speed through the corners. I've wanted to visit the track for years so naturally I've run it many times in sims, but being there and truly experiencing it was an entirely different experience that I NEED to experience again.

I started my first session just wanting to get comfortable with the track which resulted in a completely unimpressive 1:48. In the second session I really wanted to work on carrying more speed, specifically through turns 1, 4, and 6. I wasn't ready for how spooky turn 1 can be at WOT in my first session so I was able to get some work in there and progressively brake deeper. The end of the session showed an improvement with a 1:45. The third session I was able to put down more consistent laps but I didn't cut a faster time. I did however find someone that had experience at the track and was able to learn from their lines. The end result was a 1:42 with a passenger in my fourth session before I finally went four off at the corkscrew. I wouldn't say it's fast, but it is faster than I was expecting to go on tires that already had two full days on them. Plus I got this awesome shot: 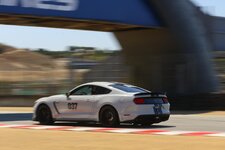 I plan to run several more this year, but there's a few hidden treasures I've found that need addressing. More on that later.

I saw an avalanche grey GT350 in person for the first time last week and about had a heart attack. Fantastic color for this car.
- Chris

For all 3V-related questions, check out this thread!
3Vs...We're Not Dead Yet!

Before I left for Laguna Seca, I knew I had a minor issue I needed to deal with. My driver-side camber plates had begun to bend but I figured it could wait one more track day before being addressed. I ended up chewing up one of my tires pretty bad so I figured it would be a good chance to hop on the Vorshlag train. Here's the passenger-side tire after the third day on these tires.

I was running -2 in the rear and -2.4 in the front. I'm probably going to dial it up to -2.2 in the rear and -3 in the front to see how that goes. Funny enough I spent a lot of time trying to figure out what those circles were. I hadn't ever seen tires do that before. Turns out it's just from the floor of the U-Haul trailer.

I decided to take some weights too while I had them off the car. I'm shedding a good amount of weight by swapping the the Vorshlag camber plates. I originally went with the Ground Control camber plates because they re-use the factory spring perch. I didn't plan on this car being a dedicated track car at that time so I figured a bit of compliance would be good on the street. Live and learn.

Overall, I'm really happy with the Vorshlag design. They're lighter, more compact, and they're a bit faster to adjust camber on the car. Since the Ground Control unit's caster adjustment is controlled by two additional bolts, I'll now only have three nuts to loosen instead of five when I make adjustments. Next up is more tires and pads to get ready for Auto Club Speedway on October 2 and then Laguna Seca again later that month. I'd like to break into the 1:30s this time around, but we'll see!

S197 A Canadian Mustang in Texas