I wrote @BMRTech an email as well as contacting Ford Sales there on Monday morning sharp about an a arm that failed under braking going into biznitch at VIR. This ultimately resulted in a good scare, minor damage to the fender and rocker panel cover, and a long story of how I got the car home.

All told, this situation went as well as it could have. had i been on the full course, it would have been a different tale. potentially with that brake zone for roller coaster.

I had run these arms in approximately 20 track events since May 2020. They had normally been run on Hankook R-S4 tires, but I have a surplus of RE71R for reasons I wont get to here and decided to start tracking on those. Perhaps the added stress was too much.

Speaking of stress, this side of the car had never been dropped off the car or had contact with another car. It had been over FIA curbs plenty but thats it. It appears to me it failed due to metal fatigue.

I am happy to answer any questions anyone here may ask to offer assistance to others choosing parts. 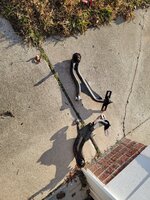 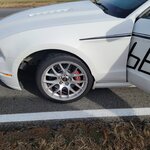 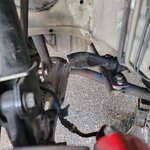 That is worrisome - it's the material, not a weld joint. Their site states .120-inch wall DOM tubing. You'd think that would be enough, but since it looks like they're still the only shop making tubular control arms for this platform, we don't have anything else to compare it to.

I've always been hesitant to run tubular control arms like that on a track car, but I know plenty of race cars run them.

Glad you're okay and it wasn't a bigger crash.
-Chris

FWIW, I’ve been WARNING people to stay away from these. Even their ‘new’ design. There was some discussion on the matter after Matt’s (Hatter) had a similar failure. IIRC, the exact same location.

Glad you’re alive and okay.
“dont give a shiznit what you think” - racer47
“Why are you such an ass?” - TMSBOSS

trackmustangsonline.com
“dont give a shiznit what you think” - racer47
“Why are you such an ass?” - TMSBOSS

Yup, you told me so!!! BMR did send me a brand new set of A Arms. Still sitting in the garage gathering dust.
Have you had your Caiman today?? Nothing like a lizard BBQ!!

Being the devil's advocate here, 20 track days ( say track weekends) at 4 hours per weekend, plus some give and take = 100 hours.
That's a whole lot of time on those parts ( for instance an engine only gets 50 hours at best).
You can't over maintain these cars enough.
Like everything else in this game, including wheels, they are just another consumable.
When I visited CCW a few years ago they had a machine that would put impacts on their wheels for testing, while most appeared benign, in fact they weren't, they all had a specific area (or moment) that actually resulted in over a thousand pounds of force focused in a very specific area. It made a very big impression ( no pun intended) on me.

Saw something similar on their hollow sway bars. Cracking at bend radius. Usually caused by improper forming (i.e. cold formed) which sets stress points. Looking at pic I think I see an area on the break which is rusted, then fresh material. That rusted area had ben cracked and exposed to elements, the remainder material eventually gave way to the loads.
Last edited: Dec 2, 2021 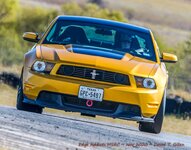 Just not worth the trouble with aftermarket FLCAs in this application, IMO. If you're not running an SLA, the 2011-14 arms are the way to go.

To their credit, Dion at BMR contacted me this morning via email (reply to my Monday message) and is sending a set of the new arms to me. They're alleged to be the new design.

Duane Black said:
To their credit, Dion at BMR contacted me this morning via email (reply to my Monday message) and is sending a set of the new arms to me. They're alleged to be the new design.
Click to expand...

So yours were the old design then, eh? Did he confirm that?
-Chris

You are very fortunate that this turned out as it did. Being that you are doing quite a few track days, go Griggs or Cortex. Don't thunk BMR components are up to the challenge.
2013 Boss 302s
2014 GT500

QUESTION - WHY DO PEOPLE RUN TUBULAR LCAS ON THESE CARS?

I will add to what some others have said, and ask more - why do people use these tubular lower control arms on the S197 in the first place? What advantage do you gain with this MASSIVE decrease in strength - as observed by the many failures noted here and elsewhere. 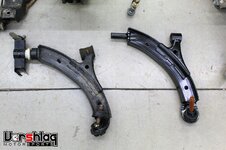 I've seen lots of crashed S197 Mustangs (see one example above), but I've never seen one with any factory based LCA TEAR IN HALF. But I've seen DOZENS of tubular LCAs fail under heavy braking or in impacts, and often wheels do come off and it can lead to real damage. HOW is saving ~2 pounds a corner worth that risk???? 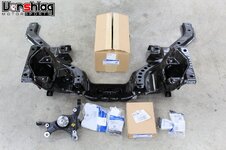 The same goes for tubular crossmembers - that drag racers like to use, but that have crept into road race builds - is that a place to go chasing "ones of pounds" on these 3600 pound cars? 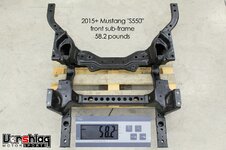 I talked about this in one of my project build threads for an S550 - we have seen a couple of crashed S197s and S550s and sometimes they will bend part of these BEEFY steel OEM structures, but not as easily as the 10-20 pound lighter tubular ones, which I have REAL questions about using on a road course. ALL of your suspension and braking and lateral loads go through this, plus the engine mass / torquing. 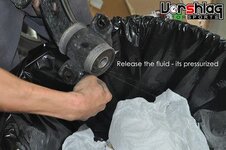 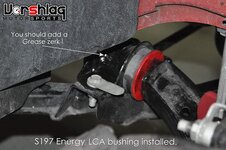 I understand the desire to get rid of the huge S197 rearmost LCA bushing, which is a hydraulic rubber unit the size of a beer can. These WILL deform under braking, altering toe. I can show that at parking lot speeds. But you can just replace these sloppy factory bushings with solid Poly units and it makes a tremendous difference (above). 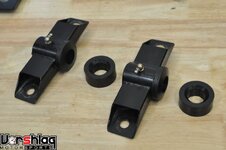 An even better option is these Boss 302S arms/bushings, which does effectively the same thing WHILE keeping the superior strength of the OEM steel LCA. The housing captures a smaller poly bushing instead of replacing the giant rubber unit with a like sized poly version. 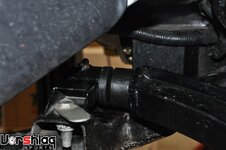 Here's one example of how the strong factory LCA saved the day.... In 2014 my wife and I were both competing in our TT3 Mustang at a NASA event at MSR-Houston, and in the 4th TT session of the day she missed a downshift, got a bit crossed up, and smacked a big curb sideways at about 90 mph with a front wheel. 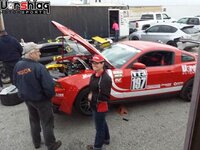 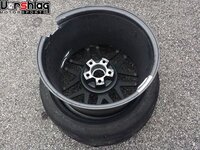 That bent the factory LCA, popped a tire and even broke a wheel (it was a HARD hit), and she had to be towed back in. But there was no fender damage, and she could have driven in on the flat tire if it weren't for our super low mounted splitter. 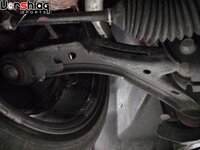 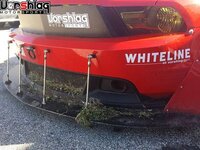 That impact not only bent but TWISTED the factory LCA, and of course we didn't bring a spare - so I swapped on a spare wheel and tire, cleaned out the lower grill, and just adjusted the tie rod to get the front toe in line. It was a janky fix, to be sure, but there was no crack or tear in the arm under close examination. 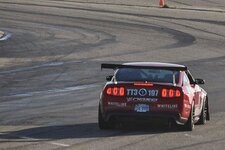 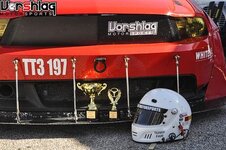 Went to grid the next morning, took it gingerly on the out lap, then let it rip - with the bent LCA. And even with positive camber on one front wheel I still won my class and was a whopping .3 sec slower than the day before (which was when I set the class lap record). My point is, with a tubular LCA like the OP's we would have had a LCA failure, pushed the car in the trailer Saturday night and not scored points for Sunday. The WAY the factory LCA just DEFORMED allowed us to press on - and again, I've NEVER seen one of these TEAR IN HALF, not in a crash or especially just "under braking". 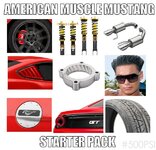 Just because there is an aftermarket part made for your car, doesn't automatically make it better. We always joke that about 75% of the aftermarket parts you can buy for a Mustang makes it slower and/or less reliable. The tubular LCA and crossmembers are very much one of those "mods" we warn people about all the time, especially for road race use.

Just my two cents... maybe 2 and a half.
Terry Fair - Vorshlag Motorsports
See all of our S197 and S550 threads in the Vorshlag Sub-Forum

Thanks for the notes @Fair . The dumb thing was I already had some factory A-Arms with polyurethane bushings on them.... I got the car home by getting a ride to my house from my dad to then grab those out of my attic and install it at night at VIR paddock and go home.

I'm intrigued what you said about camber. I was recently reading in Mark Donahue's book "The Unfair Advantage" how when they took posession of the Javelin's, Mark became convinced that it needed rear camber. So they spent a lot of resources trying to build an axle with u-joints on the ends to adjust for camber in the rear end. Days of testing at Sebring yielded exactly no difference in lap times.

Donahue notes he later learned that in lighter weight cars like USAC or CAN-AM, it mattered, but in a heavy car like a Javelin, the weight of the car forced the tire to conform its contact patch to the track.
Your tale about the camber on your car being off yet your lap time not changing much makes me remember reading that.

Duanes 2013 V6 Hertz special
You must log in or register to reply here.

Help - do I have these BMR a arms set for "max caster?"

Front A arm bushing cracked, change bushing or A arm??
2