Couple of Vids From Sebring, Race Brakes Lesson, Plus Quote of the Day

Ran Sebring with PCA last weekend. My friend (Ford Tech) was talking to one of the Porsche owners, he said to him - "when I see a Mustang behind me then go into the turns, I look back and they are gone but that Mustang (my car) is still there!"

Maybe that is why the Porsche owners don't want to do point-by's, 8)

For those with the race brakes I learned a lesion this weekend. My rear brakes we getting pretty thin but still there was enough pad for the first day I thought. They ended up lasting until the third of the four sessions second day. At the same time I was running the last two sets of take-offs from a race team. I let them run all the way down being a cheap skate ($400 for a new set of 01's). During the weekend I was having a big problem down-shifting (heal/toe).

I figured I was just having a bad weekend, the third session posted below I was missing many down-shifts. The pedal had to be pushed all the way down making it hard to hit the gas pedal. I ran the pads so low it generated so much heat I actually cracked one of the rotors. The race rotors will crack but it is hard to do. Then for the last session posted below there were new front and rear brakes installed. I was able to down-shift, not perfect but I hit most of them correctly. It occurred to me that the pistons were sticking out the caliper so long they got knocked back very easy. They do have anti-knockback gaskets but running them almost all the way down and the rear being so low at the same time made the pedal soft and going almost all the way to the floor to get hard stopping pressure.

So John, Bill or anyone else running the race brakes with 25MM pads at about 5-7MM of pad left not counting the backing plates is a good time to replace them. Waiting like I did can cost you a $500 rotor and pretty much a wasted session.

Here are some vids, the first one I tried a roll bar mount. It is hard to see the track and I had to make a tower of extensions just to see out. The Boss is just to big to make a roll bar mount worth it like the Porsche owners do. Still it is fun to see myself from a different angle and I may try to move it over a little to the right side so I can myself better. This Session was heavy slow traffic, in fact I did not get passed all day as I remember. Day two three cars were able to pass, one car was even and we had great session first with him following me for a few laps then I followed him for a few laps.

Second vids is the session with very worn bakes and the last vid with new front and rear brakes. My best lap was 2:30.2, still can't break the 230 barrier.

One last note is they put cones up along the painted line to force there people to "drive a new line' and for instructors to teach their new line. This forced me to have to make a second turn at the wall in 17, I normally run down that painted line. It was scary going in there fast so I had to slow down more then usual. They also changed their line on other turns and you can see I did not use the cones but ran the line a friend taught me. Funny thing is the cones were all over the track and I saw the yellow and red flag almost every session. One cone in 17 got hit so many times it ended up just short of the start finish line.

NICE vids! glad to see the car up and running so well. I was showing the vid to Diane and I kept saying "I hit that wall".."I had a stuck throttle there"..."I flipped my kart here" and so on, (there were quite a few of them) looking back I think I've hit every wall at that track..LOL!

Blacksheep you are a madman!

Great driving, Scott!
I see what you mean with the hand placement and the shifter

F.D. Sako said:
Great driving, Scott!
I see what you mean with the hand placement and the shifter

Thanks, you can see in this vid how I tend to leave my hand on the shifter during the straight-aways. That is something I need to fix, again treat the shifter like it is on fire. There are other points in this vids where we were going so slow I drove like I was on the street, I should not have but that session is the slowest since I first started in a beginner group. Guess it felt like I was driving to the market.

ArizonaGT said:
Scott--I will file this in the "mental database" for when I get my trophy brakes (in the far, far future)
Click to expand...

Well, I hope you hit the lottery sooner, they are a great mod.

blacksheep-1 said:
NICE vids! glad to see the car up and running so well. I was showing the vid to Diane and I kept saying "I hit that wall".."I had a stuck throttle there"..."I flipped my kart here" and so on, (there were quite a few of them) looking back I think I've hit every wall at that track..LOL!
Click to expand...

Thanks, after the engine rebuild we had the trans out two more times but got the problems figured out now. Last year after the change to 17, I almost popped the soft barrier staying wide of a car pitting. Turns out after watching the vid he did nothing wrong and I just got spooked for whatever reason and went to wide. Funny thing is the car behind me followed me almost into the barrier.

The way they set those cones up left almost no room to get around cars going into the pits. I'm looking forward to NARRA in a couple of weeks and running that turn normally. I hope to get under the 2:30.

YellowBoss said:
Well, I hope you hit the lottery sooner, they are a great mod.
Click to expand...

So other than thicker pads what's the difference in functionality? I'm researching brake upgrades for a Winter mod.

And I've been told to think of the shifter as a d*ck and it ain't yours But fire works too haha
Click to expand...

NFSBOSS said:
So other than thicker pads what's the difference in functionality? I'm researching brake upgrades for a Winter mod.
Click to expand...

I am no expert, better to call Dean or someone else. However I can tell you they stop way better and I am pretty sure it does not have anything to do with pad thickness. I know the calipers are made of different material and will cool off much quicker then the stock calipers. They have two 42MM and two 38MM pistons, not sure what the stock caliper has but I believe they are smaller.

The bigger advantage is the rotors and hats, totally different material then the hard steel type used on the stock setup. Even if I cracked one it was well worn down, at least 3MM from new and used by me for many track days and the race team before me. Again something the rotors will not do on the stock setup. The rotors are also floating which helps as far as I know.

So my best guess here is the added force from bigger pistons, cooling off quicker between turns, the rotor material and ability to float. It may also have something to do with the design of the pistons from stock but I can not say for sure.

The new 380MM is the way to go if you have rims that will fit. John and I were watching the 302R get off the gas at the 200 foot mark and then brake on the front stretch at PBIR in disbelief.

I updated my post above about pad thickness. After looking at the used pads yesterday and what happened at the track I would say 5MM of pad material would be the thinnest to be run, 6-7 even better. The backing on a 7700 is 5MM so that can be used to judge the pad material. Part of this would also depend on how much rear pad you have, even so the 5MM should stay the thinnest point to replace.

Here is a short vid of what happens when you wear a Conti slick passed the wear holes. These were the last wider rears I had and I was running them down lower then any 275's I have used. It does not look too scary in the vids but it certainly got my attention on track. The first time in the left turn was really scary even if the right hand after it looked worse on the video. I ended up having to pit the car to check the pressure since I thought a tire was going down but that was not the case.

YellowBoss said:
So John, Bill or anyone else running the race brakes with 25MM pads at about 5-7MM of pad left not counting the backing plates is a good time to replace them. Waiting like I did can cost you a $500 rotor and pretty much a wasted session.
Click to expand...

Scott - I just found this post and appreciate you pointing this out. I will make note of this. Do you have a means of measuring the thickness or are you doing this visually?

Visual, but I still pull a tire to get a better look at them then trying to see through the rim. The metal backing plate is 5MM thick so that would be a good judge, if the pad thickness is getting close to that thickness I will now change them before heading back out. Remember you need to look at the leading edge of the pad (the direction the rotor turns) since that will be the thinnest point. Also how worn the rear pads are can effect the pedal travel.

Thanks for pointing out the reference point of the backing plate. I noted that in my files, as I now have to wait 6 months to put it to use.

I purchased one of these and it works great. 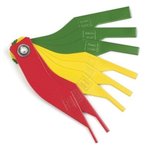 Thanks Rick, I just ordered one. 95% of the time I can visually see that my pads are fine. It is when they start getting thin that this would be helpful to know if I can get one more session out of them.
You must log in or register to reply here.

Quote of the Day

Ford Performance Video of the Day
2 3

Nice Vid of the Boss From Behind