Taking your Mustang to an open track/HPDE event for the first time? Do you race competitively? This forum is for you!

This is the Build Thread for Dylan's S197 Trackday Machine. Reply below.

I'm going to write up a prologue of my build and go over modificaitons as it went through its life, up until where I'm at today with it. This will be helpful to people who still modify S197's & a good reference to look back on for myself through the cars timeline.

2014
Background story:
I never really knew much about cars, but learnt how to drive on a manual and have always loved driving. Since a child, I've always wanted a Mustang because of the sound & muscle car look of them and the fact that they were in a acquirable price range and have very high performance per dollar value. My first and only vehicle was a used 2007 Mazda 3 GS I had been driving since around 2010. I had been keeping up to date with Mustang news over the years and when the 2010 S197s came out I knew I had to have one of these one day because I fell in love with the looks of them. I had test driven a couple back in 2011 when the 5.0 came back and just further cemented my need for one of these cars. It was a very sad day when I saw the direction Ford was going with the new generation 2015 models, which were soon coming out. I hated the look of them and knew it was time to start looking if I wanted to buy my first Mustang & still experience that new car feeling - being this would be my first expensive "real" car purchase. I began my search and stumbled upon a car which had everything I wanted. Black paint, manual V8, fully loaded and was only slightly used (2,000km) which brings the price a bit lower than something brand new.

I loved everything about this car and enjoyed ripping up the beautiful roads we have here in BC, Canada. I found myself meeting new friends and starting to go out to meetups and car shows.

October 2014
As the year went by, I got more comfortable with the car....a little too comfortable one day, took a corner too quickly in the cooler month of October and ended up spinning the rear around and going over a curb.
The driver rear smacked the curb and had wrecked the wheel and pushed the entire axle out one side.

The car was drivable, so I limped it to the closest Ford dealership which was about 20 minutes away. Damages ended up being just over $2000 - a bent panhard bar and a new axle.
After this little incident, I realized I had no idea what I was doing. How to drive properly, or control a powerful RWD vehicle. On top of that - being at the mercy of the dealership for repairs...

December 2014
I had been doing research into my incident and stumbled upon a lot of Mustangs suspension & handling conversations from various forums and people talking about suspension modifications. This sparked my interest into modifying the car and we all know what happens from here.
I knew my driver ability needed some help also, so I did not forget about this - More on this later.

I began modifying the car and found some shops which catered to modifying cars, specifically Mustangs who also helped with some advice and knowledge.
Switched out wheels for SVE Drifts:

After these were installed, I immediately became addicted to how the car felt driving home and knew there would be more modifications to do. I spent hours researching the forums and finding more information on how to make these cars drive and handle better.
Last edited: Jan 17, 2021

February 2015
Upon research I started noticing people complaining about the "MT82" transmission in these vehicles and started to realize I had similar issues with shifting occasionally. So I also began modifications for this.

MGW had great video documentation on how to install their short shifter so I figured this would be a great start to try doing an installation myself. I had zero mechanical ability or knowledge before this. So I got some basic tools and gave it a shot:

It was kind of a nightmare of an install, but I ended up getting it in there, and it was so rewarding especially after paying Ford dealership so much money for my driving accident and the custom shop to install some of the modifications I started with.

After the MGW shifter, the car did shift much nicer, and combined the previous modifications it was a joy to drive and was slowly building back some confidence behind the wheel being able to feel more of what the rear was doing & missing less shifts. I continued enjoying the car with some mountain road drives, cruises with friends and even some co-workers who were really into cars and modifying their cars.

After some more research , watching install videos and gathering more tools. I heard a lot of hype about changing shocks, more specifically these magical "Koni Yellows".
So I tackled installing these and banged this out in my condos parking garage :

These really transformed how the car felt & every single modification was just bringing me deeper down into this rabbit hole.

The same month, I had finally switched out the original Pirelli P Zero out for some Michelin Pilot Super Sports which were also a bit wider than the factory 255/40/19. This was a recommendation from my co-workers.

Later in the month, I switched out the shifter knob for this super heavyweight knob from "Flossy" they produce carbon steel shift knobs which weigh a lot more than most on the market. This is a modification which is still on my car to this day!

I really love the super heavy weight of this shift knob which helps you really slam it into gears.

The stance of the car was no longer like the SUV I was parking beside.

I thoroughly enjoyed driving the car over the next few months in the summer. We have some beautiful mountain roads up here in BC Canada.

This tune gave the car some cool features and "personality" with the choppy idle and really changed how the car sounded once it was warmed up. The car also feels a little more "woken up" I'm still using this tune to this day because I love the rumbly idle and its proven to be reliable over the years.

The tune recommended a oil catch can. So I had also installed "Bob's catch can" who had listings on another Mustang forum. I went with this catch can at time time because it was a good price.

This was when I did my first event. The true journey into the madness.
My friends had told me about this thing called "AutoX" and how I had to sign up. There was a small event hosted at a local airstrip with a racing instructor that was very cheap to enter and the car was ready to go with the modifications I had done to it.
It was very basic, with cones arranged in a slalom like setup & figure eights. I got to feel a sense of the limits in a safe environment for the first time and while it was a very simple set up, the rush I felt was incredible!

Even got to kill my first Cone!

And the first time seeing tires do this:

One comment. Back in the day the Hurst T-Handle was very popular. It was made of steel and added weight to the shifter. Then the Hurst Competition Plus shifter had travel stops. You installed the shifter and tightened the travel stops to where the shifter landed while in gear. One stop for the front and one for the back. The stops kept you from bending internal parts and beating up the syncros.
The MT-82 has "Softer Parts" than the old Muncies and Toploaders. Unfortunately, there are no travel stops on the shifters we see today. The added weight of the shift ball may cause problems down the road. May not. Thought I would let you know.

Great write up and you will find there is a six pack, er case , of Canadians on this site and I am sure you will meet some fellow TMO members when you get to the track. You had me fooled when I first glanced at your initial picture , I was convinced you had a Boss 302S , so nice conversion my friend.

Nice right up! And love your cover pic. I love seeing pics like those

Great write up. It sounds much like my journey. I'm not as far along as you yet but I'm headed there pretty quickly!
Chip 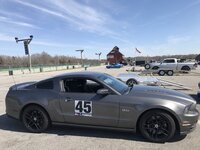 Huntsville, Al. (Just for you, Bill)

Agree on all points and keep the story coming.

Loved reading all this. Can't wait for more as I'm sure there's a paint change in there somewhere, since the car seems to have lost it's "Shine".
Proud Member of NASA Rocky Mountain and F.A.R.T

I look forward to reading more on your build. It should be quite the transformation to go from a GT to a 302S clone. I see you added a cage as well
Charles

Laguna Seca GT3
You must log in or register to reply here.