Ford tested with upper grilles that had more total open surface area with respect to the intake tract. Here's a shot with a block off plate in place during cold weather testing. 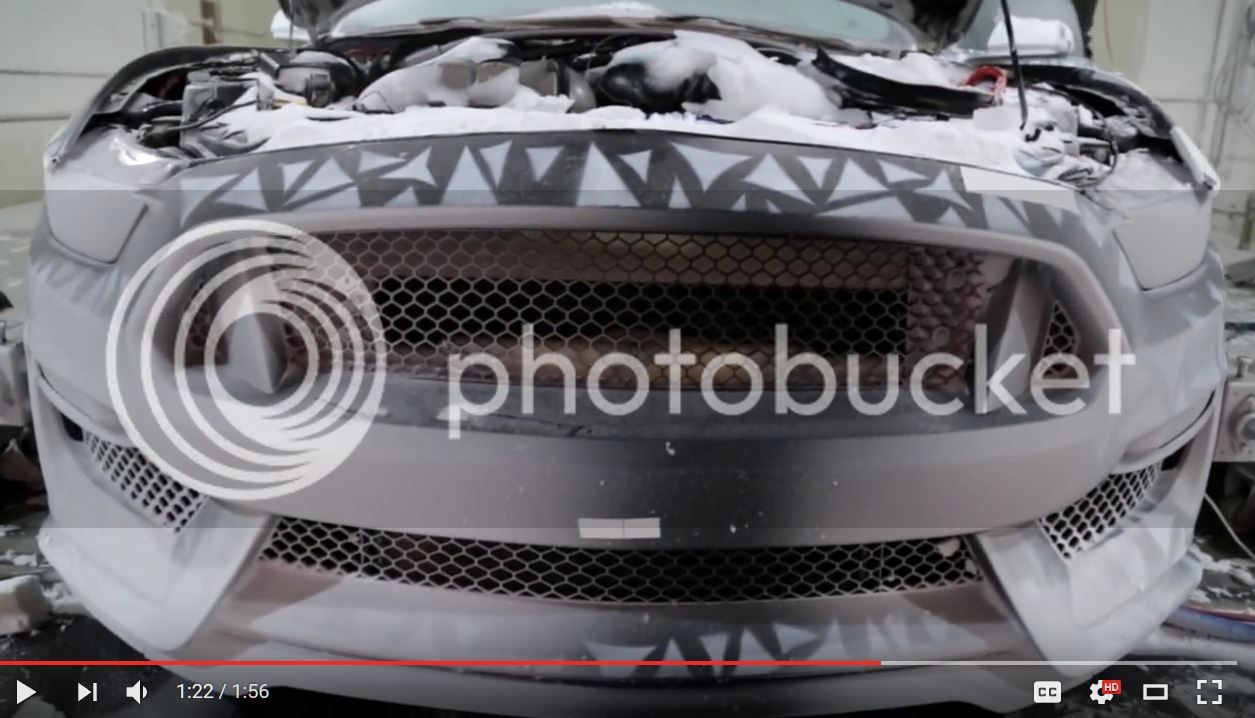 I'm not here to argue efficacy or necessity as the powerplant does pretty darn good with the rather restrictive inlet in place. When I had my front fascia off for front hook mount work I decided to open mine up a little. Here is the "funnel" in place behind the factory upper grille. 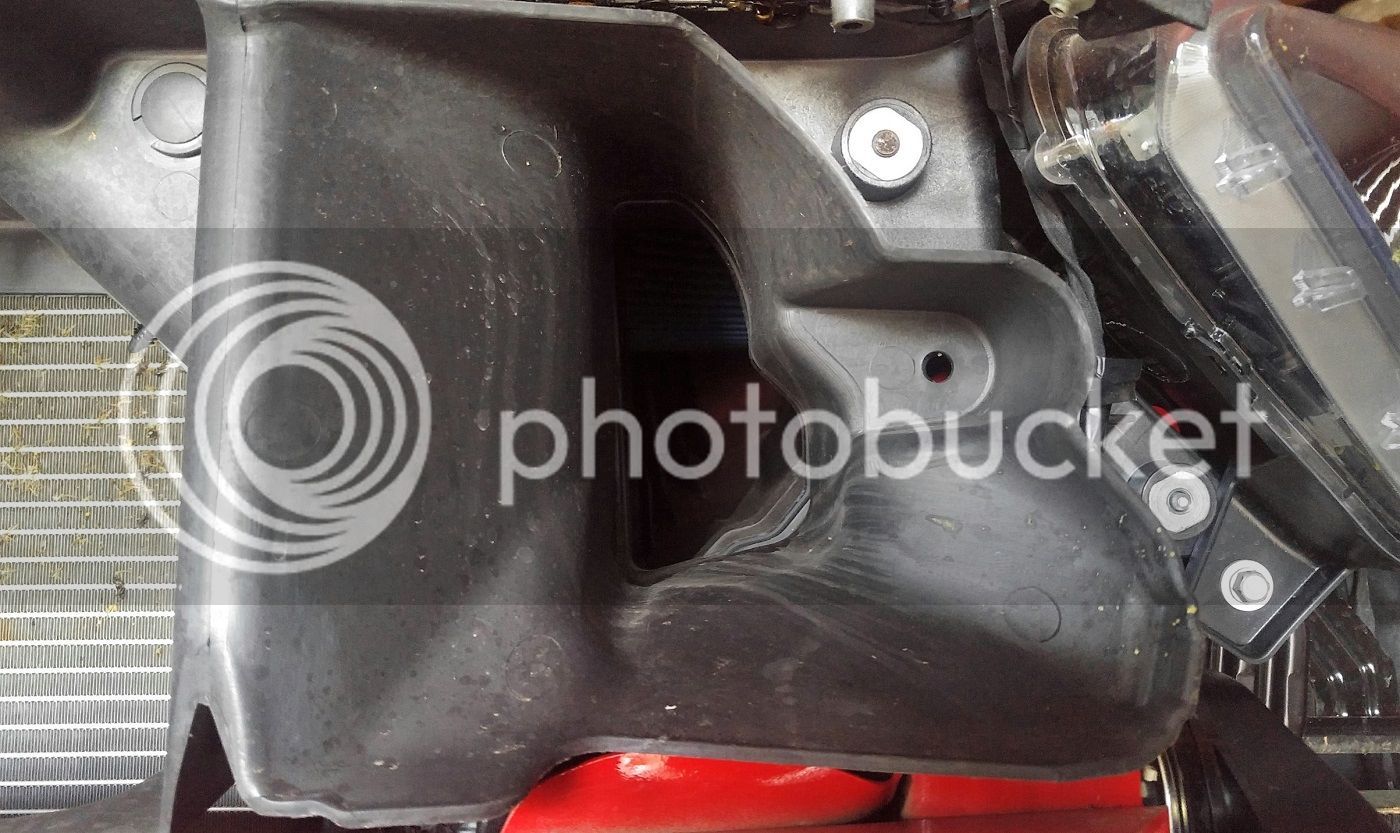 With the grille block off plate removed and placed in front of the honeycomb portion, you can see how the majority of the funnel is blocked off, leaving a very small opening over to the right for air to flow through. 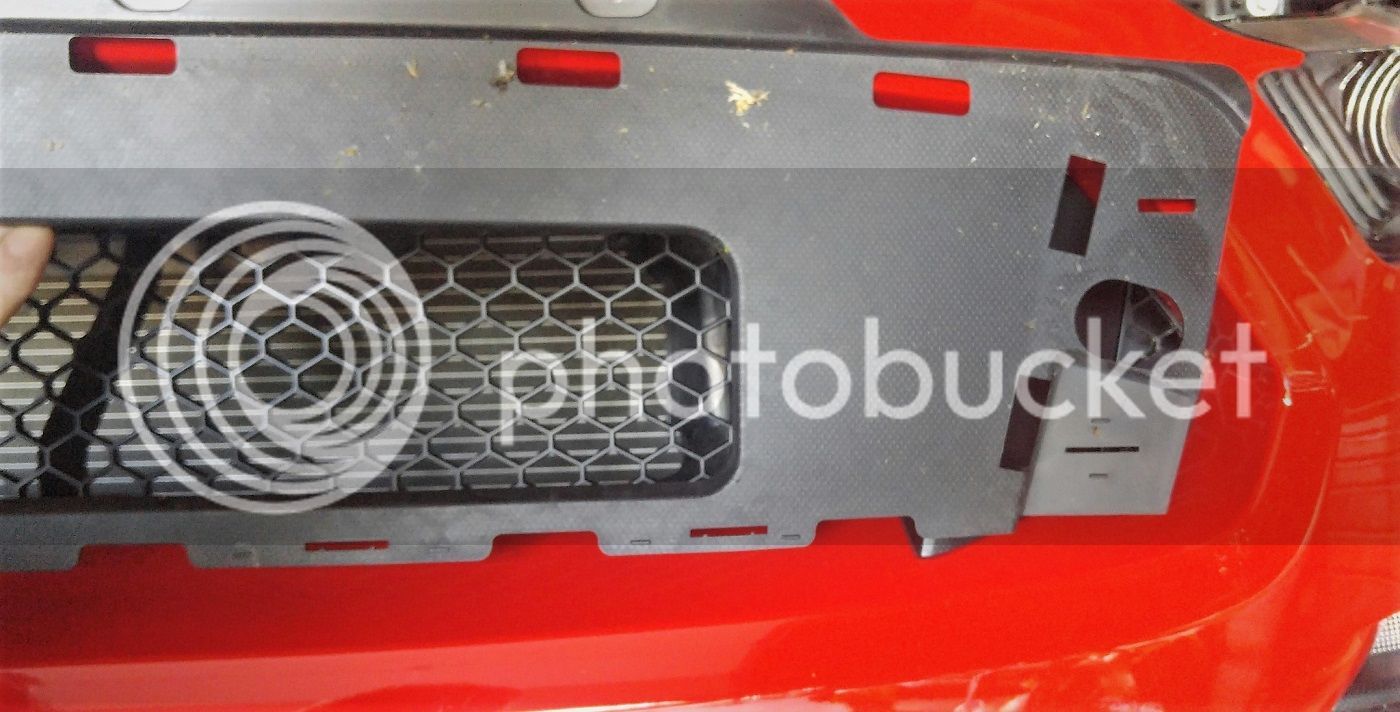 Without the block off plate... 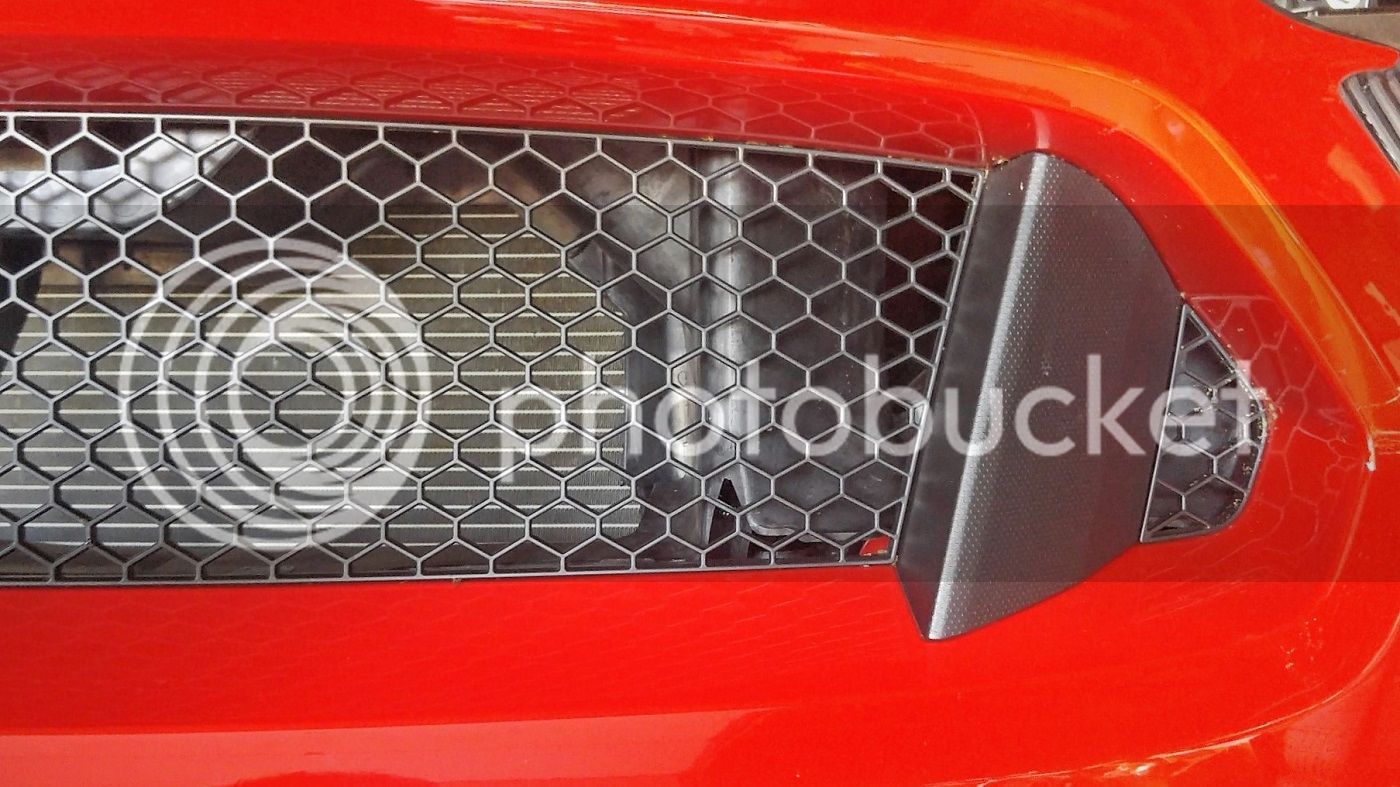 I trimmed the plate with a few things in mind. I kept the new opening a little higher to avert clash between the newfound stream and the original one. You could argue that from an aesthetic perspective that it looks off and I wouldn't disagree. There is a slice taken out of the funnel on the lower left hand corner which precludes a more symmetrical opening that would be at the same elevations as the radiator opening or the original, small opening for the intake tract. I could have gone bigger but was concerned about a false air reading at the mass airflow sensor (which has proven to be a non-issue) as well as additional water intrusion during a heavy downpour at speed (another concern that was invalidated). You are a bit limited as to placement due to the upper fang location which splits the two openings. 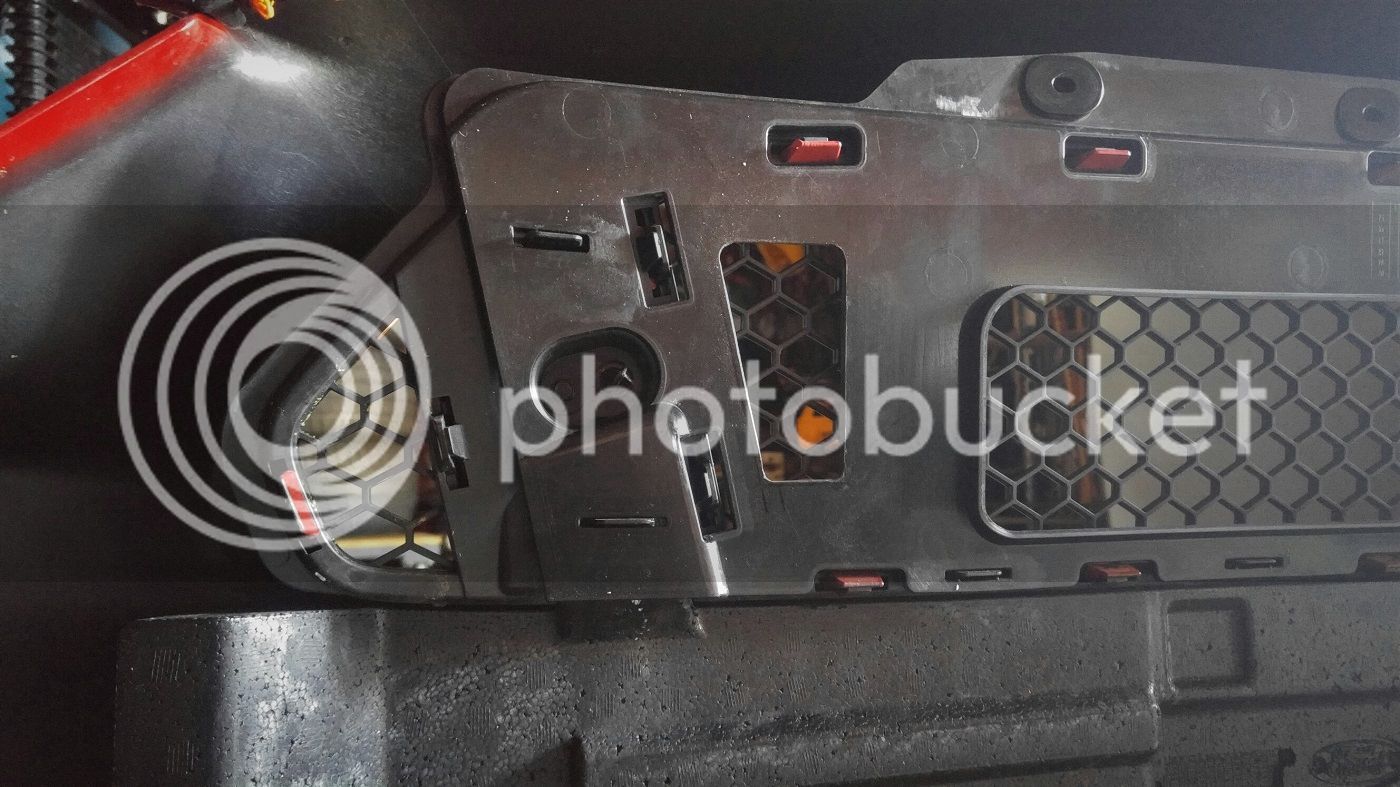 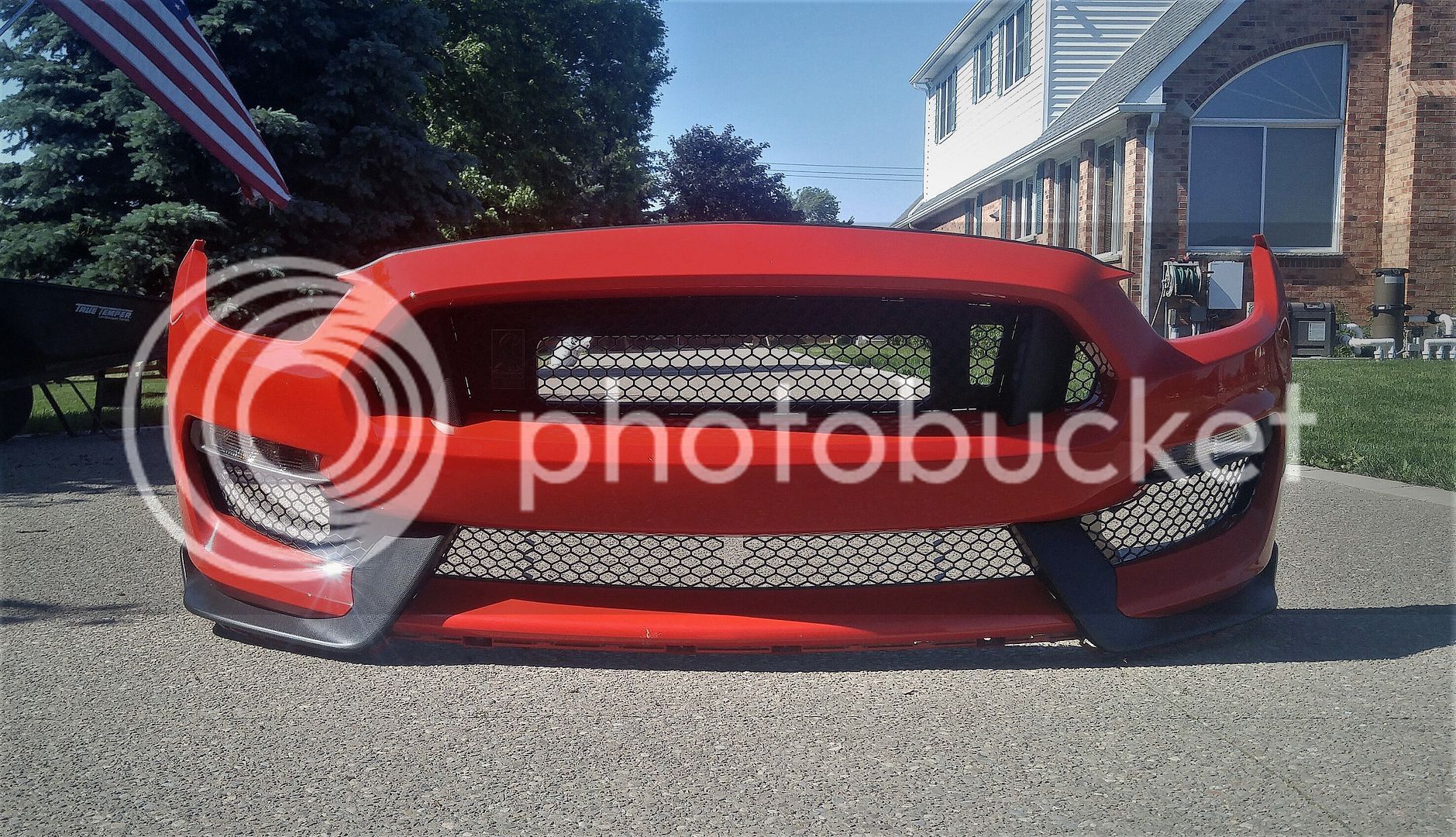 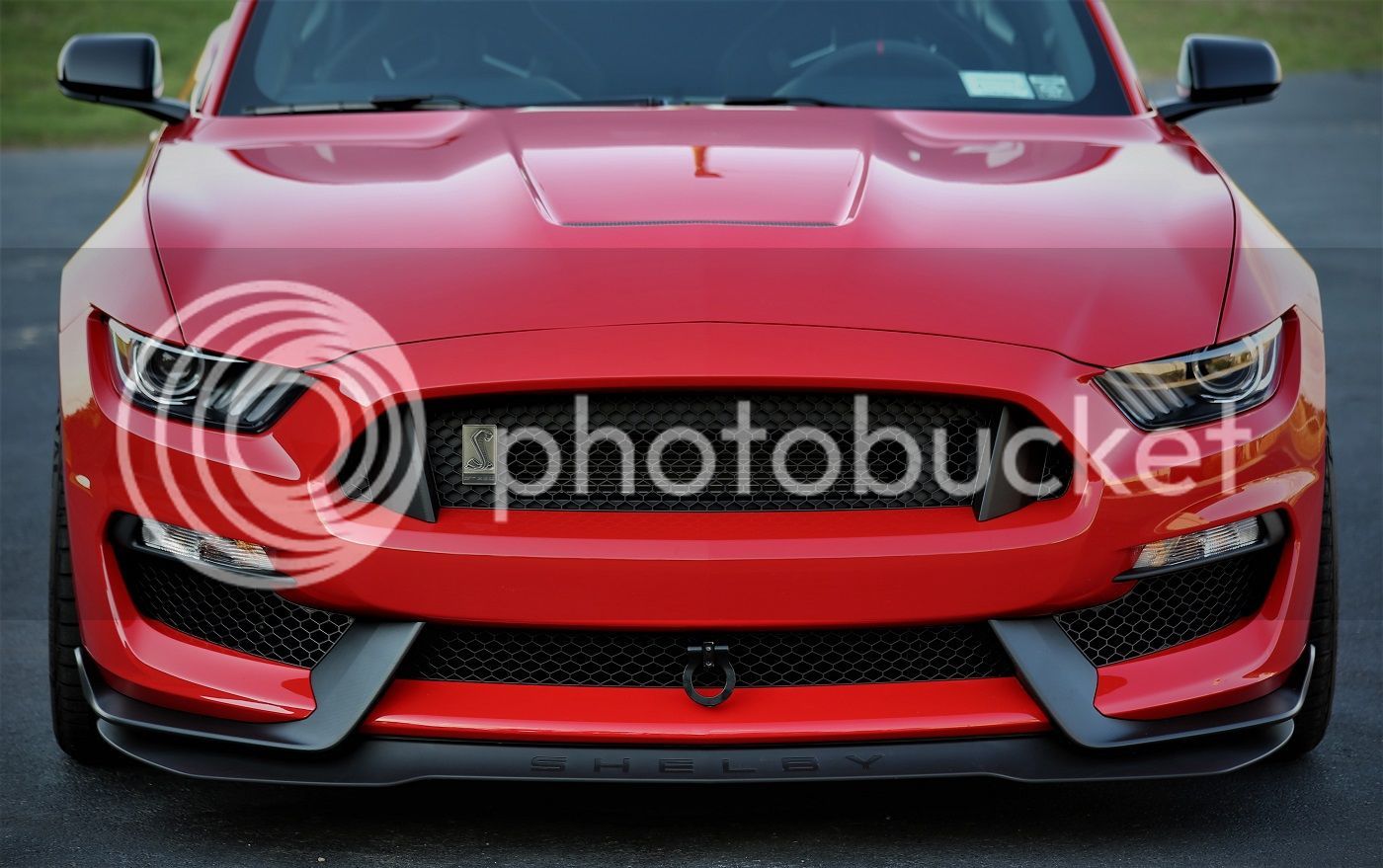 While the following gave me some inspiration I chose a different route in terms of execution. 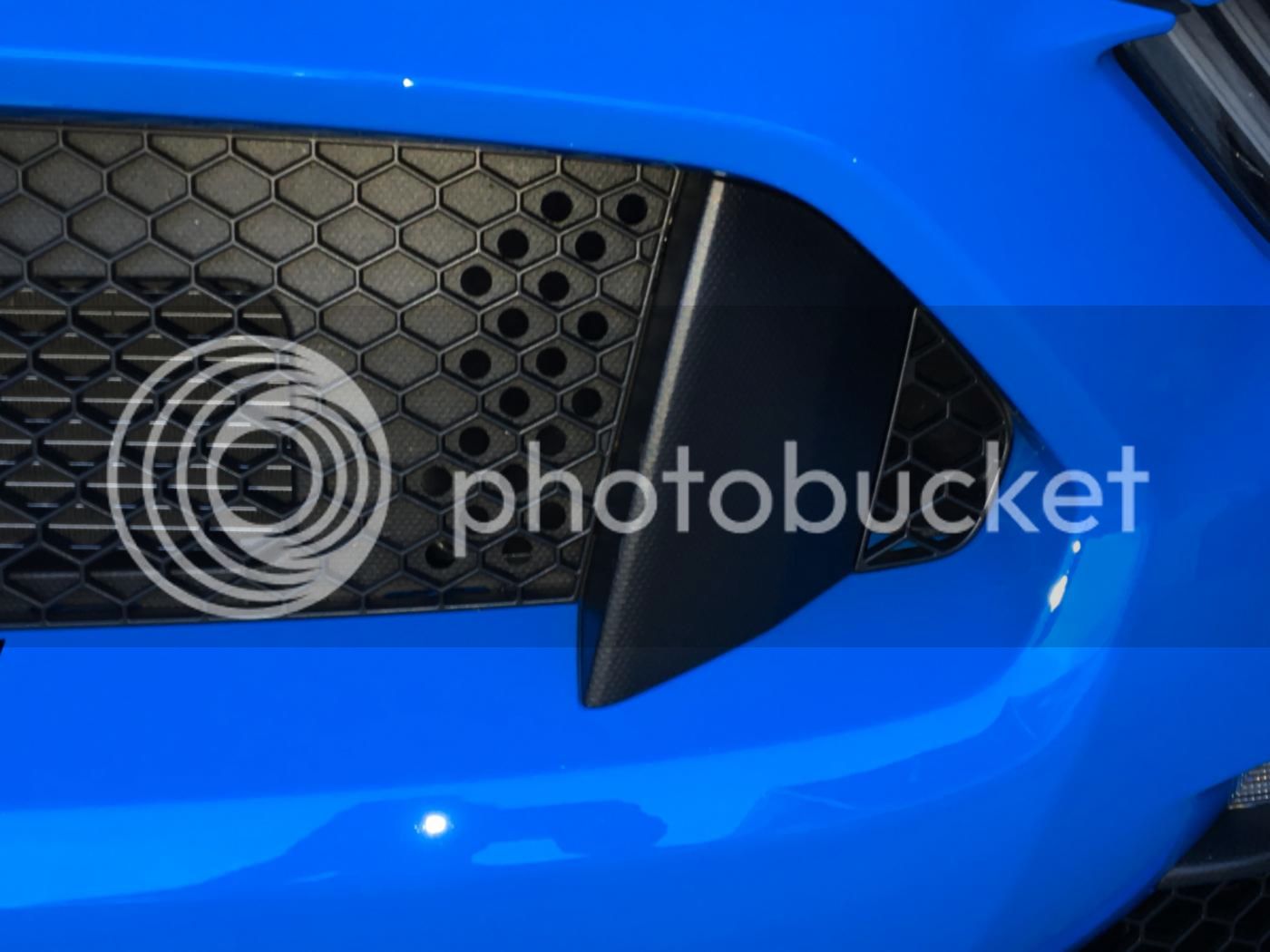 Notice anything with intake temps dropping after doing this?

Need more underhood air extraction to permit the increased inlet flow to escape from underhood and thereby increase rad through-flow. Risks are that the absence of significant additional topside ventilation could possibly pressurize the engine compartment and "choke" the design flow rate across the rad) and/or possibly create weird undercar turbulence when some of the extra inlet flow escapes down there. That in turn can possibly reduce whatever downforce the flattish underfloor provides.

No big deal though. Just pull the rubber seal at the trailing edge of the underside of the hood...or buy the FP GT4 hood. This will work a bit/A LOT.

I use my GT summertime only, so I went with a 170F thermostat, 15/85 Purple Ice (just enough OEM antifreeze to keep the water pump happy) and replaced the entire upper/lower grills with 1/4" anodized black aluminum mesh. I am waiting on a Tiger racing hood...will help with aero balance at fast tracks and let the rad sense a significantly increased airflow/temp diff.

+1 The R has a smaller radiator opening than the base 350, to reduce lift.

Increasing the effective opening area will potentially increase lift and underhood pressure, increasing hood lift. My conclusion is that the solution to any cooling issues, in addition to lift is finding a way to extract more air from the underhood area.

I wouldn't pull the entire rear hood seal without testing with wool tufts and video. The cowl is a high pressure area. On the S197, the center section sucked air in. At the end of testing, I only took off about 9" off both ends of the seal.

On the GT350, I would pull the plastic insert from the hood vent for track days.

Has anyone heard of GT350's overheating?

I've had no cooling issues, with a cumulative 70 hours of track time...

Exactly. I've run mine in 100 degree temps with the engine coolant and oil along with trans temps not getting too hot. Now my diff is another story.

Haven't heard of overheating, but pictures of the hoods lifting are a bit concerning.

Black Boss said:
My conclusion is that the solution to any cooling issues, in addition to lift is finding a way to extract more air from the underhood area.
Click to expand...

This is why when the 350R-C ran in IMSA, the front of the fenderwells were removed and replaced with wire mesh, at least that was my thinking. More opportunity for heat extraction with the OEM hood, before the time of the GT4 and the mega-vented GT4 hood.

ArizonaBOSS said:
This is why when the 350R-C ran in IMSA, the front of the fenderwells were removed and replaced with wire mesh
Click to expand...

Dean's car still has the open fenders, don't know if the new build cars do or not since the car Dean and Jack are running is one of the old 350 R/C cars

Overheating is NOT the issue being addressed with the modification above. The modification increases the air going into the intake not the radiator. He has opened up the area in front of the air intake "funnel". Most of the funnel is behind the block off plate.
J

Location
In the V6L

It occurred to me that the inlet design may intentionally heat the intake air by a few degrees to prevent icing in the throttle body when the weather is around 32 degrees and high humidity. In the old days, "carb heat" was a feature of every car.

Just not sure what it's going to accomplish without adding a tune. Someone do a dyno check before and after and report back. I'm going to have my front end off in early Oct and I'll look at this carefully.

My Other Favorite Car, The Porsche 911
You must log in or register to reply here.