With a bad back and flexibility issues it seemed like a good time earlier this year to move out of a killer ST2 Boss 302S Factory RaceCar and go back to a fun, street Mustang I could run in Time Trials and even occasionally run in an Autocross -when not running with my son in his 2006 EVO 9. The Boss found a great owner in Clarksville , TN. and it was fantastic for me to see the ole girl go to a really good home and an owner who appreciates her pedigree. I know it is silly, the Boss is an inanimate object but I seem to get attached to the vehicles I race and it feels good to see them go to new loving owners! Sorry if many of you have a tear in your eyes, I was prepared and had tissues near me while typing this.
As previously noted I was able to acquire the MGW Mach 1 from the " World's Greatest Short Throw Shift Kit Maker, " George Ciamillo, so the Silver Angel came with the killer kit already installed. Since getting the car I have gotten a set of Apex 19x11s wheels ( 2 sets ), some high quality Apex 25mm spacers , phenomenal 97mm GT4 racing studs from our friends at Capaldi Racing, and some BigAss brake deflectors from those Texas Tornados down at Vorshlag --- those babies do put some wind on the rotors/calipers. Having run out of money after I slapped on a set of Hoosier R7s ( pricing now means they ask , " Hoosier Credit Card?! ) I figured it was time to get the lady out for some inner course lapping and she politely agreed to a NASA Event followed by a Midwest Divisional SCCA one , both at Heartland Motorsports Park in Topeka, Kansas.
First of all the " Fat Lady can Sing " but it takes her a bit longer to hit those high octaves than some other machines at the track. With me aboard and a full tank of Petrol, she lumbered across the scales at 4010 lbs. Fat and sassy in your Silver garb, the amazing thing was she still felt light on her feet and she was wearing Nike sneakers since high speed corners or jamming on the EBC pads did not phase her, she just showed she had some tenacious grip. Mentally one had to get over the weight because logic tells one that this machine will not be a ballet dancer, but an Appalachian clogger and this is the farthest from the truth. My old Boss S had to weight 3501 with me in it at the end of a run, and the least I can weigh in the

Mach 1 is 3925lbs in SCCA ( Divisional rules ) or 3884lbs in NASA. The lowest I ever came in over the two weekends was 3934 and that was because she could not suck up fuel into her injectors , hiccuped twice and I decided no need to have her trundle in in limp mode. So, there is weight to lose and a rear seatectomy is in the works for NASA. Considering I was coming from a 3501 , 454 RWHP Boss 302S the surprising thing about Tessie is she really does not feel like 2 tons, she doesn't stop like she weighs 2 tons ( more on those EBC rotor stoppers in another post ), she doesn't corner like 2 tons, but I could tell she was huffing a little down the straights trying to keep up with much lighter 4 wheeled contrivances.
I ended up in 3rd Place with both SCCA and NASA, running against past Champions, but one major item I learned was I need to save my pennies and get a Garmin Catalyst. Three of the 4 drivers ahead of me had them and after going over the benefits and seeing how easy it was to take off the pad and review your runs, this is an option I will have before the year is out. I had an AIM system and camera and honestly it was not user friendly, difficult for many to download, and if you are computer illiterate like me, just watching your runs a few days later was as good as it would get. The Garmin is right there, easy for almost anyone and the benefits it give the driver during a run ( green light when hitting all your marks and more ) makes it invaluable to both Time Trialers and W2W. I was trying out the SR21 EBC pads at the NASA event and the SR11 EBC pads at the SCCA event , and as noted will comment on those later.
Lastly, what impressed me about the Mach 1 was that even though she was so much heavier than the cars she was required to run against in the Midwest Region of SCCA ( 150-1000 lbs less ) I never felt at a disadvantage except on the straights. But to be fair to her the Classification system is somewhat similar to NASA , whereas the National SCCA rules for Time Trials penalizes her so dramatically that I would be running against Vipers and Vettes, so I knew going in she had a bit of a disadvantage. Solidly classes in TT3 in NASA , every car running in the Production D Class with the Regional SCCA would be a TT2 machine, so no surprise she was slower under heavy gallop. What was surprising and gratifying was the cornering capabilities , ease of driving, great stopping distances meant this lady could pirouette with the best of them and with more seat time I am confident she will win a few this year. Getting the driver to improve will be a harder task, but the car, to me, handles like a GT350 with just a bit less power. That really shows it's head in the number of shifts it does require and that was my only complaint, as shifting to 5th was necessary in an inopportune area and one where I had never had to do that with any car I had raced in Topeka. Not bad, if that was all one could really complain about with a new car, and one which I have only had on track two times.

One final comment, the system to turn off the nannies works extremely well, allowing the driver to select his/her " Mode " and if that is full track, then just hitting the " OK " button can lock it in and it even turns off traction control if selected. I never had any issues with this except during a " Senior Moment " when the Pony felt skittish, reluctant , and did not like cornering, but then the ancient AARP racer had left all the nannies on and stability management and ABS was shrieking through all the fast corners. Back to the pit lane I went, turned off all those damn computer aided snail maker devices and went back out. Pissed , I drove like the stupid Senior I was, and the times were not that stellar, though not horrible.

A few pictures of the " Lady!" 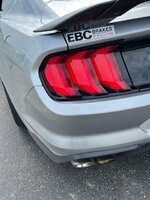 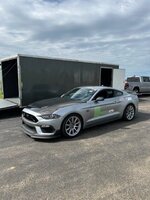 Nice write up. Essentially you have a GT350 light. Everything but the motor. I agree with all the above. Coming from the world of light nimble Hondas, I've been very impressed with how well my Bullitt handles despite it's size and weight. Looking forward to more write ups!

Thanks O-Man , but I still need to get Momma Mach on a diet as she can't be considered at any " Light " level right now, ha!

Great question but surprisingly the answer is she does not feel as heavy as she is, but I know weight is time on track. The old rule of thumb is a 100 lbs loss is worth 1 second on a 2 mile track. I can lose another 50+ , so though it sounds minimal I was running reasonably close during the NASA Event. I think seat time, loss of 50-70lbs, giving me the ability to run a bit more fuel on board to avoid fuel starvation will be of benefit.

Bill Pemberton said:
Great question but surprisingly the answer is she does not feel as heavy as she is, but I know weight is time on track. The old rule of thumb is a 100 lbs loss is worth 1 second on a 2 mile track. I can lose another 50+ , so though it sounds minimal I was running reasonably close during the NASA Event. I think seat time, loss of 50-70lbs, giving me the ability to run a bit more fuel on board to avoid fuel starvation will be of benefit.
Click to expand...

Did you go with the NEW lightweight Apex wheels?? I have thought about the carbon driveshaft, but have seen mixed reviews on those. I still ride around in my fat hog, only thing I do is remove everything out of the trunk, maybe I'll call my car Bacon....
2020 GT350 Heritage Edition

Looking forward to reading your review on the pads!

I have two sets of Apex wheels that I got on the first " Group Buy " of the year . Those are Silver Apex wheels in the picture I posted. I have a rear seat delete kit I need to install and later ( much later ) in the year I hope to get an aluminum one piece driveshaft. I am not convinced the carbon fiber one is the way to go, but I have already gotten some weight out of the car -- dropped 7 lbs in the past week plus! Coboss12, you saw the car when it had those gorgeous Signature wheels on it , and though they are also super light, I am just using them on the street. I have a set of Hoosiers on one set of the Apex rims, and will have to wait till the retirement fund gods find more money for me to get a second set of the " Gold Standard " rubber race muthas!
Last edited: May 27, 2022

Mach My Day!
You must log in or register to reply here.