Went back to Miller for a 4 day program including a NASA Race Weekend. This program was every bit as good as Boss Track Attack. Extremely professional.

The first 2 days were similar to BTA. Day 1 was in modified 2015 GT's with Street tires. That car is very impressive, on this school we ran the West Track.

Day 2 is in their recently modified Bosses: Coil-overs, Tremec's and race tires and spec'ed for ST3. One other enhancement, all participants get radio communication with the instructors, and Hans are now required in the Bosses.

Day 2 coincided with the NASA practice day, but the track sessions were Ford Racing School only, with classroom sessions while NASA were running. For us Day 2 was on the Outer loop -- Fantastic!!

For those staying for the race weekend, there was some additional prep for Saturday, going over rules, race day format, etc.

There were two of us licensing, and we had Johnny the chief instructor to work with us all day Saturday/Sunday, plus 2 mechanics on hand with spare cars, etc. We ran Warm-up and Practice on the used tires, and got a new set of stickers for Qualifying. My car got a CEL in Qualifying so I switched cars for the race and day 2.

The standard of tuition and support over the Race weekend was fantastic. It can be a bit intimidating running a large group (40 cars on Saturday) ST3 up to GTSU, but Johnny and the team did a great job guiding us through the process.

Don't have video of the race, but here's a lap from Qualifying:

I'd thoroughly recommend this program. Despite the doubts over the future of MMP, NASA Utah have confirmed they will race next year, and although nothing is announced, there was definite optimism around the place..... 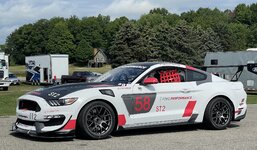 That's my guy. Great job Nick. Did the Porsche go off there or was there a track exit I missed? Hope you saw him coming when you passed the BMW.

Very cool and I bet that was a blast.

I see they are running Enkei wheels. Have they had any issues with them?

steveespo said:
That's my guy. Great job Nick. Did the Porsche go off there or was there a track exit I missed? Hope you saw him coming when you passed the BMW.
Click to expand...

Yes saw the P car coming and used his pass on the BMW to slot in behind. The P car then took a very late decision to pit and went across the curbing to pit lane rather than following the pit in exit lane

No wheel issues Rick, and talking to the mechanics they also run long fluid change intervals compared to most of us -- Diff and Trans twice a year, with no Diff or Trans coolers and Engine Oil when it's dirty -- they do have the shift lights set low to prevent students in regular school from using the full rev-range......