This is the Build Thread for RinerAutomotive SN95 Mustang.

Background on the car:
I bought the car in 2011 as a 1994 V6 base car with a seized engine. I had plans to eventually wheel 2 wheel race it in camaro mustang challenge (CMC). I figured the V6 cars would be cheaper and a better base to start from since everything would eventually be upgraded. But the first item to change is getting a running 5.0 installed. The k-members are the same so the 5.0 dropped right in.

Starting in the 2012 season I started autocrossing the car along with my dad as a co-driver. Still had V6 suspension, stock interior, but some 03/04 cobra wheels with some Nitto NT-05s. I was able to finish 3rd in my Novice season. 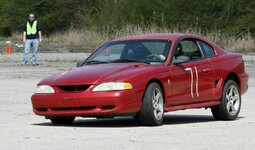 While slowly upgrading the car with new and used parts. Some of the parts that eventually made it's way on are:
I had moved up to C-prepared class. I did a couple years running on street tires but finally moved up to some used Hoosier A6s. So that's what grip feels like...

In 2016 I took a break from autocross. At this point the dreams of road racing had diminished some. I got into some off road stuff with a 1st gen 4runner.

In 2019 I started autocrossing again, but now with my girlfriend as my co-driver. My dad's health was in decline and he wasn't able to race anymore. But teaching my girlfriend how to autocross and seeing her improve has re-invigorated my racing. I'm quite happy just doing autocross events. Maybe some day will try a track day again. 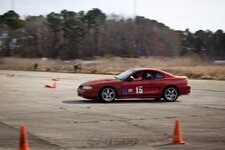 For the 2019 season I added a MM torque arm to the rear along with some fresh Hoosier A7s. Wow...the rear end was planted and the car felt like it was on rails.

I've been building this car for 10 years now and I'm quite happy where it's ended up so far. I still have big plans for the car. But the moral of the story is to get out with what you have, get seat time, and have fun.
Last edited: Aug 24, 2021
94 Mustang 5.0: CAM-T Build
Subscribe for build and autocross videos 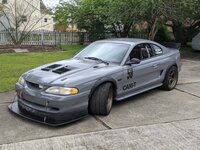 I noticed your rear spoiler. Did you do a video when you installed it? 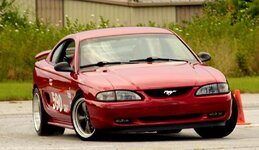 AGilmer590 said:
I noticed your rear spoiler. Did you do a video when you installed it?
Click to expand...

I made it before I was doing the videos. There are a few pictures on my Instagram, but it started as a road sign. Getting that reflective sticker off is a pain. I was going to do an adjustable wing but just decided to weld it at this angle.

Ha and I follow you. Thanks. I like your car too. I've watched some of your Budget Track Car videos too.
94 Mustang 5.0: CAM-T Build
Subscribe for build and autocross videos

As I said I've been slowing building the car over the last 10 years. I decided during the off-season between 2020 and 2021 I would take the car to the next level and improve the looks. I had to change some stuff to make it legal for CAM class any way.
Before doing all that work, I did a walk around of the car at the end of the 2020 season, which was still in C-Prepared trim:
94 Mustang 5.0: CAM-T Build
Subscribe for build and autocross videos

In 2014 I made the jump to C-Prepared mainly because it had a better PAX than SM and allowed more modifications. So out came the interior. In went a 4 point roll bar and Corbeau FX Pro seats. 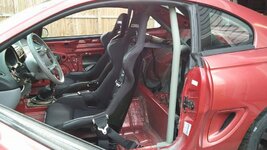 It stayed this way all the way until 2021. With the creation of CAM class I could build the car I wanted and still be competitive in autocross. Win-win. But CAM requires a "finished" interior. No problem I still have most of the interior I can put back in. Here's a video on the install. I really like how it came out, but it wasn't as easy as just pushing some clips in. The roll bar was not made for interior and caused some interference issues.
Outcome: 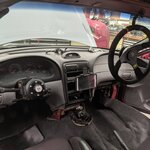 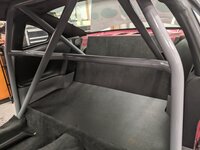 I need to cover up my back seat area with something so nobody whines about it. It was brought up at the Prosolo last year but I didn't do well enough for anybody to protest me. I got mixed up somehow because I had read that the passenger area ended behind the driver seat but that was from another set of rules and I don't remember where I read it, lol.
Casey

That is one thing that has been nice about the folks competing in Solo and Pro-Solo over the past decade to decade and a half, driver protests have dropped dramatically. Some drivers spent more time looking for ways to whine than improve their skills, but commenting on something ( like with PatientZero ) is so much more positive than protesting something that often makes no difference. Forwarned for next time is a proper approach so many times, imho.

PatientZero said:
I need to cover up my back seat area with something so nobody whines about it. It was brought up at the Prosolo last year but I didn't do well enough for anybody to protest me. I got mixed up somehow because I had read that the passenger area ended behind the driver seat but that was from another set of rules and I don't remember where I read it, lol.
Click to expand...

It seems the interior rules are vague. Some people have said they consider paint as "finished interior" because the bare metal is covered. To each their own interpretation until the stewards get involved.

I think ABS or similar looks cleaner than carpet like some people do. I'm sure you will build something cool.
94 Mustang 5.0: CAM-T Build
Subscribe for build and autocross videos

Well at the last autocross (and the one before) I was experiencing something like snap oversteer. I've never experienced anything like it before, especially not with these tires and suspension (torque arm).

Video to that autocross event:

Well after the event I checked over the car. I did not find anything loose or out of place on the rear suspension. However on the front I found that the caster setting had shifted forward from max positive on both sides. These plates were recently removed to paint the engine bay. I think I just forgot to torque them properly after reinstalling 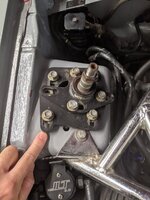 I'm hoping this is the cause of the handling issues at the last two events. That is big change in caster which will affect my camber during turning and my bumpsteer. Although, I couldn't find documentation on the caster range provided by the MM CC plates. They advertise the camber range, but not caster. I'll try to get some measurements to try to determine the caster at minimum caster setting.

I'll know pretty soon if this is the issue because the next event is next weekend.
94 Mustang 5.0: CAM-T Build
Subscribe for build and autocross videos

RinerAutomotive's Mustang
AutoX
You must log in or register to reply here.