So uh, whatcha think about that F1 finale?

I knew there would be a bit of controversy partly because the Announcers kept saying it working to portend the future, yet I thought that if this had been a NASCAR race there would be no real discussion at all. It is a race, it should end as a race, and as noted before was it really Mercedes who faulted earlier not taking on tires? When racing renews the field does not stop and get the same tires because the beauty of a track event is tactics. Knowing things can change throughout a race, hammering the gas till the very end is why F1 pilots ( and those in every racing endeavor ) are told the race is not over until the checkered flag falls. The tactics worked for Max, and this time they did not work for Hamilton, yet in my mind it was the best F1 Season ever. Two guys fighting for the title with identical Championship points, not sure how much better a final race could be.

So we go into 2022 with a new Champion, something almost always needed in Sport when you have a dominating Driver , as we can all remember the dislike for Gordon, Busch , Johnson, and others regardless of talent, because so many just wanted to see a new Champion/Winner. Hamilton will go down as one of the " Greatest Drivers ever in F1," yet like Johnson or Gordon or Scott Pruett or Scott Dixon or Vettel , eventually a new crop of racing talents appear and change the landscape. Next year should be exciting as we will see if Lewis is still dominant or will Max or even Hamilton's co driver George Russell take the reins?

I love controversy or even contrived controversy , because it percolates discussions, builds new interest and makes many drivers realize the extreme importance of tactics. I am often surprised friends don't realize that tactics in racing are every bit as important as in Football, Baseball, etc.
Heck when you get to be an older racer , tactics is your best friends as your quick twitch reflexes have flown the coop, ha!

To kind of top it off, if you've been in the racing business long enough, you know there are races that you should've won, but lost, and there are those races you should've lost, but won, as Richard Petty used to say, "It's a racin' deal".

I'm a fan of the Aston Martin team but they don't stand a chance in F1. Neither does any other team not named Red Bull or Mercedes. There's never much mystery in who'll win and watching can seem silly considering the fact it's almost always one of two teams. That last F1 race was interesting to watch because of the drama. Closest thing I've seen akin to NASCAR in a while. I'll continue to watch because it's like road course racing I enjoy myself and I'd probably watch wheel chair racing on a road course if it were available.
Proud Member of NASA Rocky Mountain and F.A.R.T

The entire season was a crap shoot. From drivers to TB's and even the biggest FUBAR, race control. No consistency with each race being "different". Not sure how different, but they were. Both teams and drivers did what they needed. I do think that RB had better/luckier pit strategy the entire year and the luck side showed in the last race. I've been a LH fan since his early career and think he just got the short straw. I much better would've liked to see a immediate red flag (that close to the end) just like in Baku, and let them race. As for back markers, if there's a SC and you stay out in order to gain your lap back (not that you are...but), why are you punished and have to give it back because one or more of the leaders pitted. You just passed the car who lapped you and now you un-lapped from that car. I'm not upset at the outcome, just the fact the way it was handled. Slowly losing faith in F1 in which I go back to the early 60's. Some changes need to be done in order to gain order.
www.weendoggy.com

Bottas, Ocon, Perez, Riccardo , all winners in 2021 , so we actually saw some variety in 2021 , and here's hoping that continues on a bigger scale in 2022 with all the changes the cars will be experiencing. I have some hope this may see McClaren and Ferrari surge forward a bit more , and George Russell has the potential to push Hamilton and Verstappen, so there really could be some surprises.
Funny how controversy fires folks up and in turn it tends to make them watch something to see what else could happen, so in a very real sense, the drama of 2021 has actually created a situation where many will watch the 2022 Season with more interest. Though it seems ages ago, this year's Championship harkens back to Hamilton's first , where he snatched the lead away from Massa. Controversy erupted at that event , it was questioned, but years later we view Hamilton as one of the best F1 pilots ever. One has to wonder if Max may be on his way to more wins or if we will see some ripple effects with the cars changing, the tires changing, and teammates changing?

it seems like whether it be Indy, NASCAR, or F1... no one gets 8 championships

I'd rather just see all sanctioning bodies undergo a complete financial audit yearly by an independent auditing agency. An audit where every nickel they get is traced. Though that's likely impossible in the times we live in with "money" being created out of thin air.

It's easy for the sanctioning body to pick a winner or make a loser. Nascar runs inspection, wink wink nudge nudge and you're a winner. There's no independent auditing of what goes on in that tent that I know of. While I love stock car racing, I think of it more like pro wrestling than a legit sporting event. And I think F1 is in that class as well.

Witness Nascar and Ford last year. Nascar mandated a tiny change to the shape of the rear quarters/wheel well that took 90 lbs of downforce off the rear. Think that didn't kill them? Over a 4 or 5 hundred mile race that's huge. Larson's a great driver, Hendrick builds good equipment, but no one is that much better than everyone else. It's more entertainment than sport.

Correct in that NASCAR is entertainment. they were organized that way and stay true to their origins. We can debate the basics of that all day. If people are not entertained, they don’t pay. this Is also how they keep their decisions and processes out of court. The other pro sports could learn from nascar. 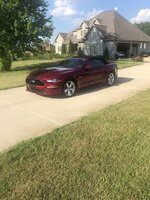 Driverless F1? Is that going to draw an audience?

Can we talk about guns and the problem with anarchy that is with us (the riots and crimes)?
2