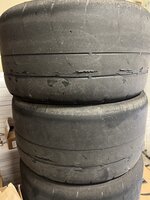 5000? Well thanks Lostotter, I did not notice but appreciate that and I hope this is all of some help to you? I am pleased you are dumping those Nittos and going to something else, because those tires are beyond tired!

blacksheep-1 said:
Oh yes, heat cycling is very important, we must have scuffed at least 10 sets fir the 24 hour.
It's basically like this, the first 4 laps on a tire will be It's fastest ( if proper prep is done) @flyhalf proved that at Daytona with his banzai run.
However, that is not a way to make a tire last. A few years ago we scuffed some tires at Daytona in a real heavy mist/rain.
We used them later in the week for the race, the BMW guy chasing us was on the same compound only stickers. AJ finished the race on blistered tires, the other guy literally blew them off the car just over halfway through.
So to answer your question, stickers will always be faster, but for a shorter period. Scuffs will not stick as well but will last a longer period of time. So I would say yes to the heat cycling, but I'd still scuff them in.
Click to expand...

Sorry for all the question and thanks, this is super helpful!!
Upvote0

stevbd said:
Pardon my ignorance but what exactly is the difference between "scuff" and "sticker" in this context? "Scuff" is the initial heat cycle process, right? Is "sticker" just going fast as you can with no initial heat cycle? And what do you mean by "yes to heat cycle but still scuff them in"?

Sorry for all the question and thanks, this is super helpful!!
Click to expand...

No worries
Some guys measure tires by heat cycle, some sticker vs scuff. What Tire Rack does is put that first heat cycle in without wearing the tire. That's all good, depending how they do it, but I still think a light scuff on the tread area is better. As an example, a lot of IMSA take offs have 1 heat cycle, but it's a 45 minute heat cycle, and it's on a sticker tire. Not the best way to extend tire life, but those Michs seem to have a pretty good longevity.
Sorry, I got interupted.
A " sticker" tire is just that, a brand new tire, it's longevity is based on how you break it in. That's what Tire Rack is trying to do by doing the initial heat cycle without wearing out the tire.
Last edited: Mar 28, 2022

thelostotter said:
What would cause this issue with the inside rears on 305/30R19 NT01s?

I have seen similar wear on a set of R888 when they were being pushed hard past their limit on an FWD car. Reffered to as "River Erosion" or "Channel Wear" . Always happened when the tire was push really hard and the tread got hot and then spinning occurred, and always happened just as seen in your pics - along the edges of a tread groove. It becomes self perpetuating as that portion of the tread is hotter than the surrounding tread and rips/wears under any spinning/sliding. 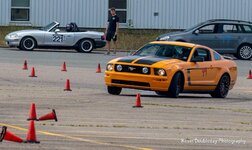 Cornerz, you be brilliant as I knew I had seen something like this years back but I could not remember the tire, but you pulled the rabbit out of the hat --- R888s!

Y'all beat me to it! I saw the same thing with R888R's I ran last year (first time using the tire); it happened after more than 30 heat cycles (est.) I've run a lot more NT-01's and not seen them do this with even more heat cycles, but they are both Toyo built tires. From the wear pattern, probably end-of-life anyway.
Upvote0
You must log in or register to reply here.