The still secret 2015 Ford Mustang isn’t expected to be officially unveiled for a few more weeks, but one website may have already unwrapped it.

Enthusiast site Mustang6G.com has published a series of renderings of the sixth-generation pony car that it says are based on actual CAD images of the vehicle, combined with information gleaned from photos of prototypes recently caught testing by spy photographers.

Although Ford hasn't even yet confirmed a new Mustang is on the way, rumor has it that photos will be revealed in December and that it will make its public debut at the Detroit Auto Show in January.

Reports are that the 2015 Mustang will be available with updated, more powerful versions of the 5.0-liter V8 and 3.7-liter V6 engines found in the current car, plus a 2.3-liter turbocharged aimed at European sales.

According to the Chinese Zodiac 2014 is the year of the horse, and it looks like that's exactly what its shaping up to be for sports car fans.

New photo and video renders are up on S550Mustang.com and the guys doing them are doing a fantastic job. The red one looks nice.

I guess we will all find out who is correct... according to Reuters - December 5th... 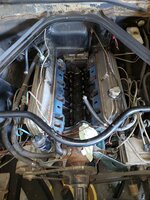 Better photos or are these renderings too?

its slowly growing on me, hope the rear end isn't as ugly as the renderings.

Steering would've looked better without those extra buttons.
You must log in or register to reply here.