Trailer and cheap have not been used in the same sentence for a couple years now - lucky!

The car had a successful first outing last Saturday at Thunderhill West. Frankly I was surprised, given the scope of work that we'd done to it, but I'm not complaining!

A few small issues did crop up: the gas gauge likes to drop to empty randomly, and the shift from second to third still sucks despite the MGW shifter. I know the throwout bearing is worn and will need replacing soon, so we'll go through the transmission and see if we can improve that shift. We got some tire rub on the front fenders, but some rolling of the fenders with a breaker bar fixed that. Relatedly, with the Steeda Stage 3 suspension we can only get -1.8° of camber at the front, so we'll have to get some more adjustable camber plates. Lastly, the radiator fan doesn't seem to run as much as I'd expect. The OEM coolant temp "gauge" never budged from the middle despite ambient temperatures in the upper 90's, and it never exhibited signs of overheating, but I'd expect the fan to be running as I come off the track—even after a cool-down lap.

It was 104° on Friday afternoon as we got to the track and got the car ready to go through tech inspection. Right after we got through inspection my buddy / chief mechanic started feeling poorly—nauseated and cramping up. Hello, heat exhaustion! We got him into the air conditioned clubhouse, poured drinks down his throat, and rubbed him down with ice and wet towels, but he was done for the weekend and stayed in his hotel room the rest of time, majorly bummed out that he couldn't drive the car he'd worked so hard to make ready in time.

I thought we had the shocks set to the middle of their range, and found the ride to be really floaty and soft, but upon checking it again they were all at the softest settings. So, I started doing sweeps: set the front to full hard for a session, then set the rear to full hard for the next session. I didn't get a chance to run soft front / hard rear, but I think we'll try ⅔ hard in the front and ⅓ hard in the rear as a baseline. (BTW, full hard in the rear produced almost no suspension movement, just a lot of rapid bouncing as the tire sidewalls flexed—crazy!) Traction of the corners with the Eaton was phenomenal, and even after the tires got greasy towards the ends of the afternoon sessions the rear end was very smooth and controllable.

The stock ABS sucks, BTW. When a front tire would start locking up the ABS would release it so much that the car would start pivoting around the other front tire that still had traction, making for some really wiggly corner entries. A very kind forum member sent us one of the race ABS units that didn't work for him; we'll get it installed before our next outing and see if it improves things for us.

Our cage builder should be able to get the cage installed next month, and after that we'll add the fire suppression system. In the meantime, I'm figuring out which AiM data system to get so we can start putting some hard numbers to the car's performance. 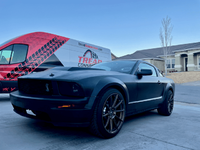 [TBD] Racing endurance car
Road Race
You must log in or register to reply here.