Are Toyo RR's the only tire you can use? I tried these out once and eeeek.

Big Black said:
Are Toyo RR's the only tire you can use? I tried these out once and eeeek.
Click to expand...

Yes, we have to run those tires and Toyo RA1's as rain tires. If you have some in 275/35/18 I will be interested in purchasing them off of you! Haha.

Picked up some 275/35/18 Toyo RR's for $400 plus shipping from Poe Motorsports! Rear end and brakes get pulled this week and new is going in! I will update as that progresses!

Looks good so far. Whats the entry fee for Spec Iron?
me - grant what racing experience do you have?
grant - none, I just pretend to know it all by regurgitating internet hearsay from the security of my moms basement

Happy Veterans Day to all of our fellow TMO veterans!

This past week major changes have went down with the SI build. The Brembo's came from Dean Martin at KohR, I ordered some from Rock Auto and they were wrong. I had to get the car ready for Road Atlanta and Dean came to the rescue with some takeoff's for $300!

I also purchased StopTech SS lines off of Rock Auto for $110!

We also swapped rearends with a buddy's wrecked convertible, as I had to go with 3.31's, QA1 Spherical UCA was installed along with FRPP Relo Brackets from Phoenix Performance ($100), and the 302R LCA's I picked up from @cobrarob ($120). I still hope to come in under $10k!

I also picked up front and rear race Pads from fellow TMO members as well! Rears were $80 and fronts were $90! I forgot to take a picture of the fronts, oops!

I also want to thank @KNS Brakes for the hook up on F&R rotors! I went with their DBA/KNS 4K rotors, I will see how they are at RA in a few weeks!

Here is a picture before we sat her on the ground!

I will update the thread when I can! Road Atlanta is December 2-3 and afterwards the cage goes in. My sister graduates from Clemson late December and for her graduation present from me I payed for her to run HPDE 2 at RA while driving the GT. The car will receive a good double duty shakedown weekend!

Another update, we when to Road Atlanta and day one was great with the car turning double duty. My sister ran HPDE 2 and I ran 4. Today we ran into electrical problems as the cluster started going crazy and the car would not start. We think it is either the starter, alternator, or battery. Tomorrow I will check for over or under charging codes. I may not have the car SI ready in January. 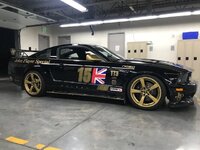 @zajac Checked battery, will have to check starter fuse, and I do not have a shaker 500 system. We think it is starter/alternator related. I will check that fuse today along with checking codes to see if something is over or undercharging. Thank you.

Alternators on the 4.6L S197s were notorious for crapping out. My money would be on that. Carry a spare.

ArizonaBOSS said:
Alternators on the 4.6L S197s were notorious for crapping out. My money would be on that. Carry a spare.
Click to expand...

Ok, I have been talking to my Ford Tech buddy and he said that is most likely the culprit as well. I am about order one.

My Saleen Mustang has only a little over 13,000 miles on it and I am on my 3rd alternator which resulted in being towed home twice. The no crank situation I had was solved by replacing the starter 30a fuse.

Zajac
You must log in or register to reply here.