Brylcreem - Do I qualify?

Yeah, good bunch here. A lot of help and positive feedback. Welcome to the enjoyment/addiction some condiser Track-Ratitis.

Heh, FLGator consider yourself lucky, the only thing Brylcreem would do for me would be to shine up my bald orb!
Last edited: Nov 17, 2021

TMSBOSS said:
Looks like the "Welds" were a little cold. No penetration.

I planned to install my ZL-1 hook next week. Will inspect closely first.

I sent an email to ZL1 this morning. I just bought it in July and the website says a 1 year warranty, So I'll let you know how it turns out. 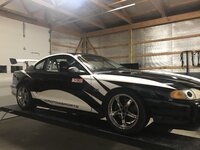 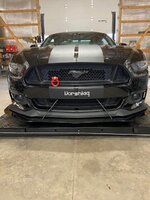 Bill Pemberton said:
Heh, FLGator consider yourself lucky, all Brylcreem would do for me would be to shine up my bald orb!
Click to expand...

ZL1 contacted me back right away. They sent their apologies and are going to send out a new one right away. That's all you can ask for!

MachUno said:
ZL1 contacted me back right away. They sent their apologies and are going to send out a new one right away. That's all you can ask for!
Click to expand...

OK, as Ricky Ricardo would say..."Tich me something"
A lot of the TT guys running the IRS are installing rear diff. pumps and coolers. Is that really necessary since a typical TT session is 15 minutes long? I'm going to ask this to the racing forum also.
Last edited: Nov 19, 2021

I just did a rear axle & trans fluid change & inspection.
I use the BG 75w140 from Optimum Performance. They make a great oil change kit that comes with everything.
After 8 events the diff fluid was a little dark. A little metal mush on the plug magnet.
Not enough to worry me, but enough to notice. 6 of those weekends the temp was 90+f too.
I'll feel better when I've built a diff cooler for it.
The trans fluid was excellent. It looked and smelled like new. No metal on the magnet and I could still see thru it.

I ran the BG the first year and part of the 2nd, I did get a couple of axle overheats but only on extremely hot days, like over 90F in the afternoon. The overheats only happened on the long uphill back straight at Mosport and they cleared within 20 seconds once I was off the straight.
I switched to Redline 75W-140 just because the BG is almost impossible to get up here and Redline is readily available at a local auto supply house. So far I have had zero axle overheats with it, however, none of the track days I ran it on were extremely hot, high 80s at most. It does seem to be as good as the BG stuff, there are no new noises or anything else to indicate it's not doing the job.
Going to stick with Redline mostly just because it's easy to get, if I could get BG as easy I'd go back to it.

Honestly after 8 events I would not be surprised and I would definitely suggest you begin changing the rear end fluid more often. From Spec Miata to Vipers to Mustangs over the years the one thing I followed religiously was some recommendations I got from some respected Engineers and racers at SRT. Getting to be good friends with quite a few Pro Racers, Ford Engineers, Driving School Instructors, the trend with all of them is fluid changes are often not done as often as they should be for racers ( or track rats ). In a 3 year period racing Spec Miata only my son and I had not gone through a rear end, and the secret was after two race weekends we changed the fluid -- probably excessive, but no problems. With the tires becoming so sticky the loads are not just from torque ( not much in a Miata , ha) of your car , it is also lateral loads. Consider changing it around 3 weekends, but no more than 4 , imho, because folks will be astute to changing engine oil , but tranny and rear end fluid is often no on their minds.

We had guys telling us we were nuts in Spec Miata , but after a couple of guys went through two limited slip diffs ( this was back around 2005-2009 ) in a season , fluid changes picked up. Racing four different Vipers over the years , with their massive torque , I never had a rear end failure. Ironically the Boss S instructions for when fluids should be changed shows 4 hours for the diff., which pretty much translates to 2 weekends in most cases.

When at Woodhouse Dodge, as the Viper/SRT Sales Mgr., we had a Motorsports Division and changing the rear diff fluid was suggested strongly to our customers after 2 full weekends......this advice came from our close relationship with Engineers and personal experience with folks running Comp Coupe Vipers in World Challenge, Viper Days and Viper Days Challenge Series, along with the Viper Racing League.

Guess it is obvious I am big on suggesting fluid changes --- do my brake fluid after every race weekend.

Thank You Bill. I am going to start doing diff. changes after every 2 weekends. It’s cheap insurance. I bleed brakes after every other weekend already.

I understand since BMO became TMO this forum has morphed to a more racing platform..so be it!!!!...I didn't buy my Boss to race....I bought it to enjoy....BIG difference!!!......Those racing your cars will go thru a lot more things than me.........Enjoying your ride has lots of different levels and $$$$$$$
You must log in or register to reply here.