(Warning in advance, rambling ahead)

Background: Built a new coyote/roadrunner motor a while back. Went overboard on cooling and sensor package, and now have some weird symptoms that may be bad gauges or setup.

Symptoms:
Oil temps read 140 if not below if the ambient air is 70* or below and car is highway cruising. Can go 50 miles without fully warming the oil (as read by the gauge).
Oil pressure reads 70-90 on start, settles to about 20, and once coolant reaches about 160, oil reads no pressure on the speedhut gauge unless you blip the throttle (obviously I have pressure or the stock pressure switch would flip - I know it works unfortunately). That or my motor seems to run just fine without any oil pressure (jk)...

Testing: I bought an IR thermometer to test with this evening.
After a 15 minute drive and 5 minutes of idling, the gauge showed 160 (climbed from 145 when I first parked). The Pan as shot by the thermo was 161, the oil cooler lines were 178 and 170 respectively at their fittings. The cooler core was 158 as best as I could shoot it. I am thinking something about that pan may be such that the sensor is getting more of a reading of the pan itself, which may be slightly lower temp than the oil itself. Still not sure why that would be the coolest place in the oiling system. This was all sitting idling in the garage without the car's fan operating. When it did operate, all temps dropped about 5-7*.

Some images of the setup:

Can't see the gauge wiring, but I have good grounds on both gauges, oil temp is in insert in side of pan with an appropriate brass NPT adapter.

My thoughts:
The system is too large a capacity for street use, however actual oil temps are higher than the gauge is reading. Is it possible both my gauges just read somewhat low? I'd be inclined to believe both read between 10-20% low. I'll email speedhut for further guidance, but anyone else have some thoughts on a car that seemingly runs too cool?

Too Hot for the Boss!

Did the instructions on the sending unit indicate that sealant should be applied to the threads on install? Some sending units with single wire attachments are VERY sensitive about that as it is used as a ground point. A faulty ground would / could lead to inconsistent readings on the gauge.

Your water temp sensor has little to no flow by it. Being downstream from the T and then after the elbow and in the airstream could be effecting the temps.

I put the sensor for my water temp gauge in the block just to the rear of the oil filter and oil cooler. There is a threaded hole there that Ford uses for the block heater. Sensor is directly in the water jacket. Could be the same location you are using except no plumbing in between the sensor and the water flow.

JScheier's point could also be a issue. Is it possible to run a temporary ground directly to your sensors and see if there is a difference in gauge readings? Something wrapped or clamped to the sensor. If the temps come up or if they bounce around, loose temp ground, them you may have found your problem.

The T just has pressure senders, not temp.

The oil temp sender is in the side of the oil pan. though for fun's sake, I did run a seperate clean ground to the sender (wrapping the body) as a test.

When it's cold, even with a thermostat you might need to block off the oil cooler. I had to on my 71 row set up. it help a lot. oil temps hit 180 in about 30 min most times. 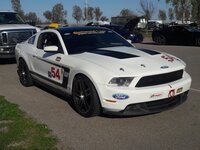 Another update: Colder day (44 out) but I did wrap the core.

It didn't seem to make a meaningful difference on a 25 minute drive.

The sender in the pan (note the secondary ground wrapped around it):

Odd bearing wear issue along with some rear brake oddities: