I own Gotta Have It Green Boss #2499. Through an act of stupidity in late July 2015, I had to replace the hood. After finally getting a perfect paint match, my body shop painted the hood. Then, after waiting the prescribed amount of time, they had the hood restriped using factory Ford stripes. The car looked fabulous...for two weeks. I noticed some bubbling under the stripes. Every time the car was out in the sun the bubbling got worse. I contacted my body shop and the owner said whatever it took he would make it right. After some discussion, we decided to wait until late winter so we could be sure the off gassing was done. The car went back to the body shop in early march, which is about 3 1/2 months after it was painted. the car was heated to 120 degrees on two separate occasions. On both occasions the bubbling got worse. Now I am questioning the stripes themselves. I don't see how it could still be off gassing. Anyone have any ideas? I know Ford has had issues with the vinyl in the past, could I have gotten some of the old stripes? Long story short, the hood stripes are on backorder. When the body shop first checked, there was a lot of stock and now it is gone. It seems as if Ford has pulled all of their inventory off of the shelf. After two discussions with Ford Customer Service, it is pretty clear they are not willing to absorb any of the cost, or warranty the new stripes. The car went out of warranty in October 2015. If anyone has any ideas or can help in any way I would greatly appreciate it as I have basically been without my car since July 2015.

There might be a bad batch of stripes out there plus the car has been out of production for about three years. How difficult was it to match that color?

I don't know if its a paint or decal issue, but if you need a new decal, try Bob White.
Over the years, he's gotten good reviews here for his products.
http://www.bobwhitedecals.com/

Good luck getting it resolved.

VoodooBoss, it was a very lengthy process to get a match. There are so many different mixes out there from the different paint companies. The pearl in most formulas was too gold. My body shop stuck with it though and got it perfect.

Drano38, I thought about Bob White, and might try them as a last resort, but I would really like to stay with all ford parts if possible.

Thanks for the comments!

That stinks, ghigboss. Just be aware that a lot of Bosses had the same problem - I think mainly the '13s. My '13 LS has had several small bubbles under the stripes/lettering since new and I have read of other people having the same problem. I never bothered having the dealership fix them because I had little faith in them 'improving' the situation.

PM me your vin, I will check into the stripes for you see what's out there

My stripes had bubbling and I noticed it after I purchased my Boss. It lasted about 6 months and I noticed that every time I washed it they were slightly smaller. My car was out in the sun during the day but always garaged. I had some work done to it also and the replacement stripes did the same. My insurance would cover it for the entire time I own the car so I wasn't worried about it, but you made me go look and its gone. Thats just my experience. Good luck & keep us posted. 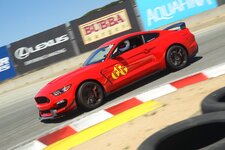 One of the rare Boss LS in Switzerland

I spoke with Bob White decals yesterday. They don't do stripes for the 13 Boss. Aftermarket reflective stripes flip to a different color than the factory stripes.

93cobra found all the info that I needed, so I will wait (impatiently) for the factory stripes.

Good news from Ford customer service. Both stripes I need will be shipping today, so with any luck I will have my car back early next week!

Well, the stripe saga continues. When the R/H hood stripe arrived the packaging looked as if it had 5 gallon buckets sitting all over it. very deep impressions in the cardboard, which I'm sure have transferred to the vinyl inside. there were also several rips in the cardboard. No way that is going on my car. I got in contact with my Ford customer service rep on Tuesday and told him what was going on. He said he would find out when I could get a replacement stripe and let me know. I have not heard from him since, nor have I been able to reach him via telephone. My ultimate goal was to have my car back on the road for our clubs National Mustang Day celebration on the 17th. That looks very doubtful now. This is so frustrating!

I'm happy to report that #2499 is back on the road and looking good. Thank you for your help and comments, especially 93cobra. I really appreciate it!
You must log in or register to reply here.

2013 stripe issues. Anyone have a dealer fix yet?