Finally got a chance to run the 315 Falkens at the NNJR finale and couldn't be happier with the results. Was 1-2 finish for me and the old man in CAM, and a 27th overall PAX finish out of 108 drivers (including 21 Pro's at the event). This season didn't live up to our expectations, but taking the class win at the finale was the high point of the year after facing parts supply issues, unexpected repairs, cancelled events, and everything else that was thrown at us.


On the 285 Falken/18x10 tire setup the car was pretty competitive even with a blown rear Koni yellow (unbeknownst to me until last week). For this last event we swapped in the new Viking Berserker double adjustables, a smaller 20mm rear bar, and the 18x11/315 Falken combo. All I can say is what a difference! The car was better across the board and far easier to drive to the limit. We still have some rear shock tuning to do (first time with doubles), but I know the car is only going to get faster as we fine tune it. As we rack up some more miles on the Vikings I'll post a review, but with ~500 miles on them I am VERY impressed with both the street & autocross manners

We've got two more events left on schedule for this season to continue dialing in the car: 11/7 PCA at Tobay beach and 11/13 MSNE at Metlife

During the off-season I'm going to explore some street friendly CAM-C aero, look into a driveshaft upgrade, and maybe some more weight reduction to get closer to 33XXlbs. Looking forward to picking your minds as we head deeper down the CAM rabbit hole lol

The car still has a little low speed push, but I think some more compression/rebound tuning in the rear can compensate until we re-align the car next year with slotted struts and more camber to up the front grip.

Why did you go to a smaller rear bar?
Casey 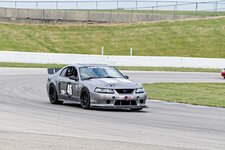 PatientZero said:
Why did you go to a smaller rear bar?
Click to expand...

Took it off for 2 reasons:
- we were spinning the inside tire even with the rebuilt carbon plated trac lok in tight corners
- the street manners sucked

What part of the corner are you getting the push - entry, middle, exit? If it's entry or exit, you can tune with shocks, if it's steady-state middle, it's more tunable with bars. However, you might be able to trade one adjustment for the other with a change in driving style. If you have mid-corner push and the car feels very stable on corner entry, you can use shocks to "free up" the car on entry and get the car to rotate a little more by using more/deeper trail-braking, so you don't need to do as much turning mid-corner. If you're not trail-braking to the apex, just doing that and keeping a little more load on the front could cure the push.

The end of the 2021 season was challenging on many levels. On a positive note, the 315 setup has proven to be fantastic coupled with the Viking Beserker double adjustable shocks out back. That being said there was a minor incident with the car which has spurred a few changes as we prepare for the 2022 season

The biggest item on the agenda will be building the rear end with a few upgrades to hardware. At the moment the plan is the following:

So far I'm happy with the front suspension combo of OTS Koni yellows with GC sleeves and GC street camber plates, will be looking to add more camber up front next year with slotted strut holes

In other news, the old man sold his G Street GTI and replaced it with a new Ridgeline, so it looks like we will be down to 2 functional autocrossers in the fleet. Locally we'll be running the E street 94 Miata R package with Yokohama a052's (14inch!) on small lots. The plan is to use the Mustang for larger venues locally and try to hit a few stops on the 2022 SCCA Solo Tour: NNJR Pro Solo, Champ Tour at Fedex Field, and the Champ Tour up in Seneca Falls

Hope to have some more updates on the way soon!
-J

2011 Mustang V6 Performance Pack: Building the wrong car for D Street
AutoX
You must log in or register to reply here.