My trip to the Dragon

This trip has been in the works for about 5 months. I was lucky to take delivery of my Boss the week before we left. This is our local car forum and was put on to raise money for the Franciscan Hospital for Children, I think the total raised was just over $10k.

First things first I removed my exhaust baffles and had the track key programed. next was clearbra met my buddy and fellow rally driver there in is newly delivered GT500.

Departure was hosted by Aston Martin of New England in Waltham, MA

Day 1 was a fairly short drive to Willow Grove, PA
mostly uneventful drive we left Waltham, MA around 7pm. on the Merrit Parkway we encountered this damn truck who kept knocking cones over in my lane.

Day 2 Knoxville, TN (long drive).
to break up some of this drive we stopped at winery, Blenheim Vineyards owned by Dave Matthews. Beautiful place with great wine for pretty short money. Only problem they were not set up to ship to Massachusetts. Oh well.

After some lunch we were back on the road for Knoxville. Finally arrived around 9pm just in time for some quick dinner and a night out (luckily no pictures of that).

Day 3 The Dragon
We arrived at the start of the Dragon around 10am on the TN side. 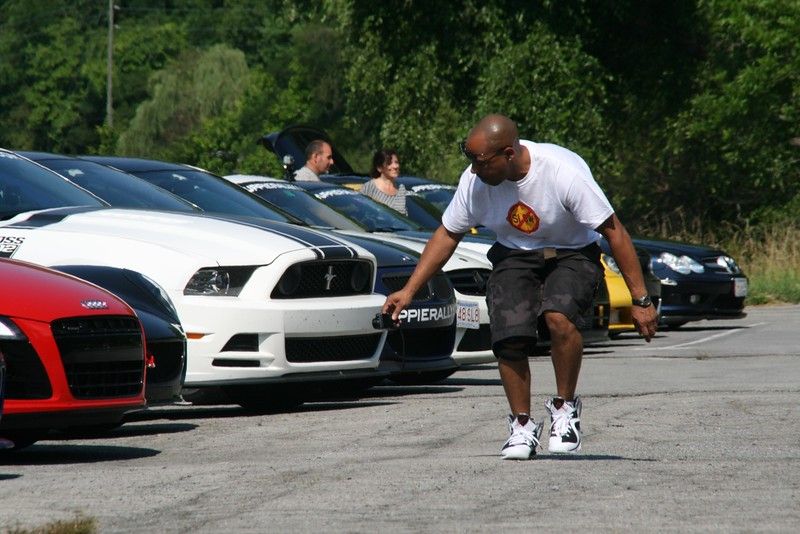 The Dragon itself is NO joke by far the craziet road I have ever seen. With this being a weekday traffic was pretty light. The Dragon did bite our group and 1 car was totaled both driver and passanger were 100% fine. Was a very scary moment though as this was the car right in front of me. Per the owner of the car it is not to be identified or pictures posted at this time.
On the NC side, we spent some time here waiting for a tow truck to drag the wrecked car out of the woods.

Next up was a road I thought was far better than the Dragon the Cherohala Skyway. This road was much better for the large Boss with long high speed sweepers it made for a much more fun driving experience. Far better vistas as well.

http://a2.sphotos.ak.fbcdn.net/hphotos-ak-ash4/459027_670232736697_1014987912_o.jpg[img]
We spent the night back in Johnson City, TN
Day 4 starting to head back north Williamsburg, VA
Nothing really great about this day had 100 miles or so on some pretty good roads in the morning but then was pretty much all highway to VA. Also speeding in VA is apparently a pretty big deal and radar detectors are illegal.
car line up in Williamsburg.
[img]http://sphotos.xx.fbcdn.net/hphotos-ash3/523588_10100562300956189_1736326739_n.jpg
Day 5 Atlantic City, NJ
Pretty good day. Got to drive across the Chesapeake bay bridge-tunnel it was pretty impressive. Lunch stop was directly on the beach the weather was perfect could have stayed there all day.

Finally arriving in Atlantic City around 8pm. Pretty lucky there are no pictures from Atlantic City it was a good night.
Day 6 Boston, MA
Long hung over drive home. My co-driver and I probably switched off driving every 2 hours.

Yes we had some issues but it was a great trip. The Boss performed flawlessly this trip really made me love this car.

oh yeah I think I killed every bug from MA to TN.

Sweet, thanks for the write up!

I understand and respect the driver that wiped out not wanting his name out there, but can you share the car type?

Thanks for the pics. That is quite an eclectic mix of vehicles.

What is the common thread of your group that brings everyone together?

we are all just local car enthusiasts / friends. car that was totaled was the M6

forgot this action shot from killboy:

Jeff said:
we are all just local car enthusiasts / friends. car that was totaled was the M6.

forgot this action shot from killboy:

sure was. pulled over on the next turnout to let him pass.

I forget that people will drive hundreds of miles to find a road on which to put their Boss through its paces. I live in Colorado, and we have literally dozens of great roads here, so many that there is a new version of Forza being developed around the roads in Colorado. I get to drive some beautiful twisties on my way to/from work every day.

Utah has some great roads, too. Highway 128 along the Colorado River NE of Moab is a truly great driving road, for example, as is the La Sal Loop Road outside of Moab.

Anyone heading this way in their Boss, PM me and I'll give you some suggestions based on where you are headed.

BTW, your buddy who crashed is car is an everyday occurrence around here. Motorcycle crashes are even more common. The good driving roads here have one thing in common: a high penalty for screwing up. On most roads a little skid onto the shoulder is not possible, because there is no shoulder, just a tree or a creek or a cliff.

Jeff said:
sure was. pulled over on the next turnout to let him pass.
Click to expand...

there are turnouts every where I used many of them. the street bikes are crazy. Later on in the day a school bus came down the road. ???

What a fun trip. I'm glad the 993 Tubro wasn't totaled. They are holding their value well and becoming quite collectible. Got any good photos of it?

5 DOT 0 said:
What a fun trip. I'm glad the 993 Tubro wasn't totaled. They are holding their value well and becoming quite collectible. Got any good photos of it?
Click to expand...

Been there on the bikes, never in my cars. My experience with it is that there are so many bikes an police officers that watch for speed and yellow line crossers that it can take the fun out of it.

not a single cop on either the dragon or the skyway.

fresh detail with no signs of the 2500 miles of carnage.

5 DOT 0 said:
What a fun trip. I'm glad the 993 Tubro wasn't totaled. They are holding their value well and becoming quite collectible. Got any good photos of it?
Click to expand...

It looks to be a 993 because of the laid back headlights. The 964 used the old stand up style of headlights.

NOT!!!
You must log in or register to reply here.

Trip to the Dealer may be in order

Road trip with the Boss