Hey Gary, Guys
How about this one? 8) http://www.cheperformance.com/CartGenie/prod-320.htm
Guess it's a knock off of the Cobra Jet piece which is probably $1200 or unobtanium.
I should have before the weekend, will report weight savings unless someone has already done it.
Steve

Will be curious on the weight savings. Any idea what it does to crash protection for the engine or if it would affect deployment of the airbags?

cloud9 said:
Will be curious on the weight savings. Any idea what it does to crash protection for the engine or if it would affect deployment of the airbags?
Click to expand...

Plus you could not mount the splitter bracket with that bumper.

Crash protection will be affected no doubt. Mod can be reversed, there are 8 spot welds that are drilled out but you can use 8 or 10mm bolts and nuts to replace them if desired, or even reweld the bar to the absorbers. Bar weighs 3.3 lbs, stock beam?, 20 or so? Will find out this weekend.
Steve

As appealing as that bumper might be in terms of reducing overall vehicle weight (especially up front) I would avoid it for road course or street duty. The appeal for it is drag racing and I'd be queasy with it at that.

The CHE aluminum bumper would yield far too quickly and greatly affect the design metric for crash/impact performance. The OEM bumper is constructed using specific alloys (ultra high strength boron with a TIG welded seam) in order to allow Ford to achieve satisfactory crash rating for frontal impact. As mentioned, the supplemental restraint system would also be negatively affected. For more on what Ford designs into this system, take a look at the following destructive testing Ford did...

Pay specific attention to the collision video of OE vs aftermarket Mustang front bumper beams starting at the 3:20 mark.

In addition watch the following video of another Ford bumper being compared to the aftermarket unit when attempting to cut through it.

The CHE piece would fare far worse than even the aftermarket part.

For the record, drilling out the spot welds on the factory bumper to allow its removal is fairly easy.

I removed mine to weld on a bracket that allows slipping in anchors for a tow hook/loop that can then be quickly removed - all without cutting the front bumper.

Thanks for posting them.

Need some help. Got the FRPP tubular tow bumper replacement. Cannot get the OE bumper reinforcement piece off of my 2008 GT. I don't see the spot welds between the bumper and the plates...only a few connecting the plates to the car framing; are these the welds that must be drilled out? Is the bumper welded to the plates (hoping not)? Anyone remove an OE bumper from their 2008 GT?
Last edited: Feb 24, 2019
Jim

Thread is almost nine years old. You might be better served by starting a new one.
- Chris 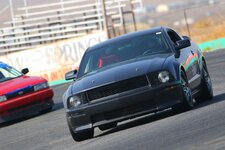 Wouldn't it be better to keep all the info in one place?
Bruno

I could be wrong or I could be crazy but I thought someone did have a thread with weights that was updated from tyme-to-tyme.
Proud Member of NASA Rocky Mountain and F.A.R.T

There's one over on the drama site, it does have a pile of stuff in it. It's in the General Forums as a sticky and the name is obvious.

another post..back from the dead

They're coming to get you Barbara!
Proud Member of NASA Rocky Mountain and F.A.R.T

I like using a thread, however old, if it is accurate to the discussion. Even if old, it gets put to top of recent activity and I hoped it'd yield a useful reply. I'll keep searching...
Jim

No problem with us about a discussion of weight reduction, but Chris M, above ,probably had the best idea, why not start a new thread? I would like to see what folks are doing as there are likely a ton of new ideas that have come to pass over the past 9 years. We all support your idea/question, but why not take Chris's suggestion and start a fresh thread and I know I for one appreciate you bringing up this subject. Thanks ,and I think you will find a bunch of current and new ideas will come out with your question.

Not a fan of starting a new thread because if you use the search function it's a lot to pick through. if the topic is concise, you can hopefully find all the info in one place.
Not sure where the Forum Big Brothers sit with this.
Proud Member of NASA Rocky Mountain and F.A.R.T

Understand where Tyme is coming from , but my reasoning for a new thread is quite simple, it enables many of us to get the new items and thought process that didn't necessarily exist 9 years ago. So instead of wading through tons of information ( some which is no longer relevant), we get current data that keeps many from going down a rocky path , that maybe has been paved since then.

Example - ( using myself) . 9 years ago I never heard of Braille batteries , but now many folks are looking into them. Tyme knows I think the World of him , yet we don't completely agree on everything. I am listing my biases and concern from being in the Automotive Business for 30+ years. We did more modifications on Vipers than any Dodge Dealer in the US, but the atmosphere was constantly changing. I think it is pretty true with all performance vehicles , so saving the newcomer from buying items that have been superseded by current innovations is my reasoning to begin anew.

All fine points. This discussion got off the rails, I guess. I decided not to drill out my spot welds after all and will not install the Ford Performance tubular tow bumper. I think that cross piece (which is the main connector for the two longitudinal frame rails), and the welds therein, are too critical to chassis stiffness...IMO. I already pulled the OEM radiator support for a tubular Steeda piece. I'll look to modify the OEM bumper.
Jim

Blacksheep was on this thread and I imagine he might chime back in if for nothing more than to let you know wise choice to not drill out seam welds. I know in reading some of his beneficial posts that you are 100% correct in the fact that you would have decreased your torsional and chassis stiffness. Good move and keep us posted on how light you get down to?

Das Boss S Bauen Thread
You must log in or register to reply here.